About Dharjya Konwar
Status:
Imprisoned
About the situation

On 11 July 2020, human rights defender Akhil Gogoi tested positive for COVID-19, whilst fellow defenders Dharjya Konwar and Bitu Sonawal had both also tested positive on 9 July. All three are currently imprisoned in Guwahati Jail in Assm, as part of cases filed by the National Investigative Agency (NIA). 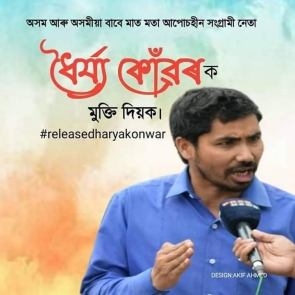 On 14 July 2020, human rights defender Manash Konwar was released from Guwahati Jail after he was granted bail by the National Investigation Agency (NIA) court the previous day.

On 15 July 2020, Bitu Sonawal was granted bail by the NIA court. The human rights defender, who tested positive for COVID-19, is now undergoing treatment in hospital and will be released once he has regained his health.

On 11 July 2020, human rights defender Akhil Gogoi tested positive for COVID-19, whilst fellow defenders Dharjya Konwar and Bitu Sonawal had both also tested positive on 9 July. All three are currently imprisoned in Guwahati Jail in Assm, as part of cases filed by the National Investigative Agency (NIA).

Akhil Gogoi is a human rights defender and advisor to Krishak Mukti Sangram Samity (KMSS), an organisation working with indigenous communities in Assam to protect and promote their land rights. Dharjya Konwar is a human rights defender and also works with KMSS. Bitu Sonawal is with Satra Mukti Sangram Samiti (SMSS), an organisation affiliated with KMSS in Assam, working on indigenous rights, especially the right to land and against violence and atrocities against the indigenous community.

The three human rights defenders have been in Guwahati Jail since December 2019 when they were arrested for their significant roles in the anti-CAA campaign in Assam. Front Line Defenders believes that their arrest and incarceration under the Indian Penal Code and the regressive Unlawful Activities Prevention Act (UAPA) is solely due to their peaceful human rights work. Despite Supreme Court directives to de-congest prisons in the context of COVID-19, the defenders remain imprisoned and are prevented from seeing family members and have limited access to their lawyers, who are limited to two-minute-long consultations with their clients. In one case, when the defenders were granted bail, a new FIR was filed against them so as to prevent their release. Their current applications for bail are pending before the Guwahati High Court. A fourth defender Manash Konwar, member of the SMSS who was held along with them, was granted bail on 13 July, however at the time of writing, prison authorities have refused to release him, claiming that Guwahati prison is a ‘containment zone’.

There has been growing concern for the health and safety of the three imprisoned defenders due to COVID-19 and the heightened risks of infection they face whilst in prison. On 7 July 2020, Akhil Gogoi was unable to attend a virtual hearing before the special NIA Court due to ill health. The defender is already particularly vulnerable due to medical conditions he suffers from, including a condition affecting his kidneys. The NIA Court ordered that the three defenders and Manash Konwar be tested and given treatment. Since testing positive for the virus on 9 and 11 July, all three have been transferred to a government run hospital in Guwahati for treatment. In media footage of Akhil Gogoi being transferred to the hospital, he appears extremely weak and denounced the judicial harassment they had been subjected to.

Front Line Defenders is extremely concerned for the safety and well-being of the three defenders who have been imprisoned due to their peaceful human rights work. The COVID-19 pandemic has increased the risk human rights defenders in India are already faced with, as they now risk their health as well their liberty and reputation. In recent months there has been a distinctive escalation of persecution of defenders in India who speak out about regressive laws and policies. Front Line Defenders has condemned the crackdown on human rights defenders peacefully protesting the CAA, including Akhil Gogoi, Dharjya Konwar, Bitu Sonawal and Manash Konwar. Their continued incarceration despite the inevitable impact on their health and is a reflection of the level of disregard for the safety and protection of defenders in India.