About Nimalka Fernando
Status:
Threats & Harassment
About the situation

From 9 March to 23 March 2012, Dr Paikiasothy Saravunammutta, Ms Nimalka Fernando, Ms Sunila Abeysekera, and Mr Sunanada Deshapriya were targeted by government media and a Government Minister for their participation in the 19th session of the Human Rights Council in Geneva, where they had been lobbying to expose human rights violations in Sri Lanka. 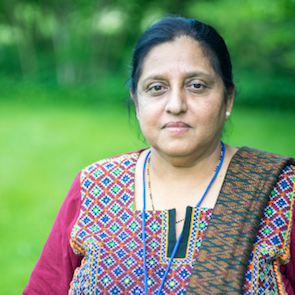 Nimalka Fernando is a lawyer and social activist. She is the president of the International Movement Against All Forms of Discrimination and Racism (IMADR) and the Women’s Forum for Peace in Sri Lanka. Nimalka is also an active member of Mothers and Daughters of Lanka, a diverse coalition of women’s organizations in the country.

From 9 March to 23 March 2012, Dr Paikiasothy Saravunammutta, Ms Nimalka Fernando, Ms Sunila Abeysekera, and Mr Sunanada Deshapriya were targeted by government media and a Government Minister for their participation in the 19th session of the Human Rights Council in Geneva, where they had been lobbying to expose human rights violations in Sri Lanka. Paikisothy Saravunammutta is the Executive Director of the Centre for Policy Alternatives. Nimalka Fernando is the President of the International Movement against All Forms of Discrimination and Racism. Sunila Abeysekera is the Executive Director of INFORM Human Rights Documentation and is a recipient of the 1998 UN Human Rights Prize. Sunanda Deshapriya is a human rights defender and press freedom campaigner and was the subject of a Front Line Defenders' appeal dated 29 September 2011.

Since March 2012, State affiliated newspapers, news websites, TV and radio stations, and government websites have been conducting a smear campaign against the defenders and accusing them of treason and of being affiliated with the Liberation Tigers of Tamil Eelam (LTTE), a now defunct separatist armed group operating in Northern Sri Lanka. The human rights defenders have also been accused by the state media of receiving money to work against the interest of the country.

On 23 March 2012, Minister of Public Relations Mr Meryn Silva reportedly threatened the human rights defenders with physical harm if they set foot in Sri Lanka, during a rally against the Human Rights Council resolution on Sri Lanka. According to the Ceylon Today newspaper, he is reported to have said “I will publicly break the limbs of people like Sunanda Deshapriya, Nimalka Fernando and Paikiasothy Saravanamuttu who lobbied against their own country”.

On 17 March 2012, Paikiasothy Saravanamuttu, Sunila Abeysekera, Nimalka Fernando and Sunanda Deshapriya were branded as working for the LTTE in an article published on the Lanka C News website. There were disturbing comments made by the readers including calls for the defenders to be killed and their houses burnt. On the same date, an article entitled “Sri Lankan NGO activists work with LTTE rumps in Geneva” was published on http://news.lk, which is the official government news portal in Sri Lanka. It alleged that the defenders “depend on foreign funds for their survival and continue to work for their masters by engaging in acts to betray Sri Lanka in Geneva” and “these few Sri Lankan NGO activists are part and parcel of certain other INGOs and the LTTE rumps”.

On 16 March 2012, an editorial in the newspaper Dinamina entitled “Legend of Sunanda and others” characterises human rights defenders as “degenerates”. The article accused Paikiasothy Saravanumuttu as presenting false evidence on human rights abuses in Sri Lanka. The editorial branded Sunila Abeysekera and Nimalka Fernando as liars and women “who have gone astray” and characterised Sunanda Deshapriya as “a mouthpiece of the LTTE”. The newspaper also stated that in a country like Iran these “kinds of bastards would be stoned in public”. This article was later been pasted on the official website of the Ministry of Defence and Urban Development.

On 14 March 2012, an article entitled “Pakiasothy, Sunila and Nimalka working with LTTE rump” which was published in Daily News, accused Dr Paikiasothy Saravanamuttu, Sunila Abeysekerea, Nimalka Fernando, and Sunanda Deshapriya of “continu[ing] to work with the LTTE terrorist rump and betray Sri Lanka in Geneva”.

On 9 March 2012, in an article published on the Lanka C News website, a comment was made by a reader asking whether there was anyone willing to set fire on Sunila Abeysekera's home.

Front Line Defenders expresses concern for the physical and psychological integrity of human rights defenders Paikiasothy Saravanamuttu, Sunila Abeysekera, Nimalka Fernando and Sunanda Deshapriya in light of the threats and media smear campaign to which they have been subjected, and believes they are directly related to their human rights work and their exposure of human rights violations in Sri Lanka at the 19th session of the Human Rights Council .