About Mahienour El-Masry
Status:
Acquitted
About the situation

On 13 January 2018, Mahienour El-Masry and Moatassem Medhat were acquitted by Alexandria Appeals Court of charges of illegal protesting, committing acts of thuggery, and insulting the President of the Republic, effectively overriding the two year sentence previously issued.

On 30 December, HRD Mahienour El-Masry was sentenced to two years in prison on charges related to a protest against Egypt's concession of two Red Sea Islands (Tiran and Sanafir) in April 2016. The appeal hearing of El-Masry and Moatassem Medhat will be held on 13 January 2018 during which the defence attorneys will appeal the sentence.

Mahienour El-Masry was transferred from Qanater women’s prison to Ab'adiya Prison in Damanhour City, Beheira Governorate on 16 December 2017. A verdict hearing has been scheduled for 30 December 2017. 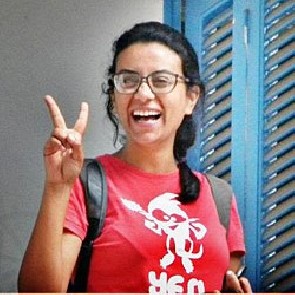 Mahienour El-Masry is a human rights defender based in Alexandria who works to promote judicial independence and prisoners' rights by organising peaceful protests, raising awareness using social media, and organising support for political prisoners in the form of solidarity events and bail fundraising.

On 30 December, HRD Mahienour El-Masry was sentenced to two years in prison on charges related to a protest against ratification of Egypt's concession of two Red Sea Islands (Tiran and Sanafir) to Saudi Arabia in June 2017.

The ruling by an Alexandria misdemeanors court heard charges related to assembly, protesting without a permit and insulting the president.

Mahienour El-Masry works to promote judicial independence and prisoners' rights by organising peaceful protests, raising awareness through social media and organising support for political prisoners in the form of solidarity events and fundraising for bail for prisoners.

On 18 November 2017, the Alexandria Misdemeanor Court ordered the remand of human rights defender Mahienour El-Masry, pending charges in relation to a peaceful protest over the Egyptian Government’s failure to implement decisions of the judiciary.

On 18 November 2017, the Alexandria Misdemeanor Court ordered the remand of Mahienour El-Masry and co-defendant Moatassem Medhat, pending charges in relation to their alleged involvement in a peaceful protest in June 2017 regarding the Egyptian Government’s failure to implement certain decisions of the judiciary. The two human rights defenders, along with three others who were not detained, are being charged with “insulting the President of the Republic”, committing “thuggery”, and illegally protesting. Mahienour El-Masry was attending a court session when the order was made and the decision was implemented immediately.

Mahienour El-Masry was charged with two other human rights defenders, Moatassem Medhat and Asmaa Naiem, and two activists, Waleed Al-Omari and Ziad Abu Al-Fadel. Despite the fact that hundreds attended the protest, it is believed that Mahienour El-Masry, Moatassem Medhat and Asmaa Naiem were targeted specifically for their work in relation to human rights. The next hearing is scheduled for 30 December 2017.

In April 2016, during a sweep of more than 300 arrests in Cairo, Alexandria and other governorates, Egyptian security forces arrested several human rights defenders and transferred them to different police stations. The sweep of arrests was a reaction to a series of demonstrations held on 25 April 2016.

Mahienour El-Masry has faced continued harassment from Egyptian authorities, including a two year sentence in 2014 for taking part a protest, subsequently reduced to 6 months, a preventative detention order in 2015, and a one year and three month sentence upheld the same year in relation to a sit-in on police aggression.

1. Immediately drop all charges against Mahienour El-Masry, Moatassem Medhat, and Asmaa Naiem as it is believed that they are solely motivated by their legitimate and peaceful work in defence of human rights;

2. Immediately and unconditionally release Mahienour El-Masry and Moatassem Medhat, as Front Line Defenders believes that they are being held solely as a result of their human rights work in Egypt;