About Kamil Ruziev
Status:
House Arrest
About the situation

On 29 May 2020, human rights defender Kamil Ruziev was detained outside a courthouse in Karakol, Kyrgyzstan. He was then interrogated and spent two days in detention, before being placed under two months’ house arrest on 31 May, on charges of forgery. 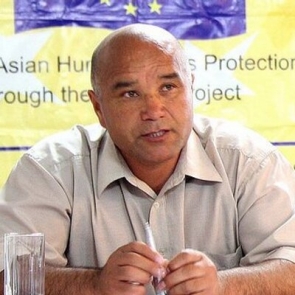 Kamil Ruziev is a human rights defender and lawyer, and acting head of the Karakol-based organisation Ventus. He has been working for more than 20 years on combatting torture, violence and arbitrary law enforcement, defending the rights of victims of torture and victims of domestic violence.

On 29 May 2020, human rights defender Kamil Ruziev was detained outside a courthouse in Karakol, Kyrgyzstan. He was then interrogated and spent two days in detention, before being placed under two months’ house arrest on 31 May, on charges of forgery.

Kamil Ruziev is a human rights defender and lawyer, and acting head of the Karakol-based organisation Ventus. He has been working for more than 20 years on combatting torture, violence and arbitrary law enforcement, defending the rights of victims of torture and victims of domestic violence.

On 29 May, Ruziev was detained by officers of the State Committee for National Security (GKNB) of the Issyk-Kul district while leaving the Karakol city court. The officers allegedly detained him as a witness. Following his detention, he was interrogated and denied access to his lawyer. Kamil Ruziev received a detention order which listed him as a suspect, rather than a witness.

On 31 May, after spending two days in the Karakol detention centre, Kamil Ruziev was informed that he was being accused of forgery of documents (Art. 359, part 2 of the Criminal Code) by the GKNB. On the same day, he was notified of a criminal case that had been opened against him on 11 March 2020, for the same charge, of which he had never been informed. Also on 31 May, the GKNB sent a press release to Kyrgyz media which stated that Kamil Ruziev is suspected of fraud (article 204 of the Criminal Code) and forgery of documents. Despite the accusation of fraud mentioned in the press release, no formal charges have been brought against him on this issue.

On 29 May, Kamil Ruziev went on hunger strike in protest against the arbitrary detention and poor detention conditions. Members of his family brought medicine for him, but he never received it. On the night of 30 May, the ambulance was called three times for Kamil Ruziev. Despite numerous requests, he has not had access to his lawyer Asantur Moldogaziev since being detained. Moldagaziev was not informed of the interrogation of Ruziev on 31 May and was not present to represent him.

On 31 May, the Karakol city court found the detention of Kamil Ruziev to be legal and placed him under two-months’ house arrest. Ruziev and his lawyer advocated for the freedom to move within the jurisdiction, due to his need for medical treatment and see his doctor, but the court refused.

Kamil Ruziev believes that the charge of forgery is related to a medical certificate he obtained after suffering from acute bronchitis. After doubting the legitimacy of the certificate as it did not have the official template of the medical centre, Kamil Ruziev himself appealed to the prosecutor's office of the Issyk-Kul region to verify the certificate, who found it authentic. He believes that the controversy regarding the certificate is being used by the GKNB as a pretence for his arrest, and that he is being targeted by the GKNB, which is attempting to discredit his human rights work and retaliate for his involvement in cases involving the use of torture by the GKNB and other law enforcement agencies. The cases date back to 2018 and 2015, and in both instances, Ruziev filed complaints against GKNB officers to the prosecutor's office, in particular against the lead investigator of the Karakol police department, Bakhtiyar Tokushev.

Since then, Kamil Ruziev has been threatened and harassed by the investigator on a number of occasions. On 10 June 2019, he allegedly threatened Ruziev with a gun at the building of the Karakol police department, and on 12 June and 4 November 2019, Bakhtiyar Tokushev threatened to kill Ruziev. Both threats were made in person, one in the police station and another on the grounds of the Karakol police station. In all three instances, the human rights defender filed complaints against Tokushev to the office of the prosecutor of Karakol and the GKNB, and in all three cases, the investigator was not held accountable. In 2020, Tokushev resigned from the Karakol police department. According to Kamil Ruziev, however, he continued to threaten him even after resigning and on 14 May 2020, he attempted to attack Ruziev outside the office of the GKNB.

Kamil Ruziev has filed a total of 14 complaints against the employees of the GKNB and the prosecutor’s office of the Issyk-Kul to the Karakol city court and the Issyk-Kul regional court. Both courts dismissed his complaints. On the day he was detained by GKNB officers, Ruziev had been attending a hearing for one of these complaints.

On 2 June 2020, Kamil Ruziev was hospitalized due to deteriorating health stress endured while in detention. The human rights defender remains in hospital at the time of writing, and he and his lawyer have appealed the court’s decision to sentence him to house arrest.

Front Line Defenders is seriously concerned by the harassment, threats, arbitrary detention and prosecution of Kamil Ruziev on baseless charges. It is particularly concerned regarding the charge of forgery brought against him, which it believes is an attempt to discredit him for his peaceful and legitimate work in defence of human rights, and in direct reprisal for his complaints made against the GKNB and the Karakol police department for their use of torture.