About Hany Babu
Status:
Denied Medical Treatment
About the situation 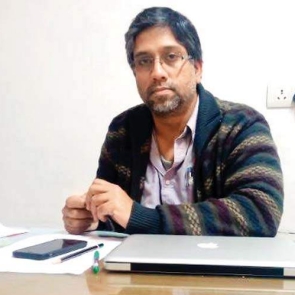 Hany Babu is a human rights defender, an academic and a campaigner for the rights of Dalit and marginalized communities. At the time of his arrest, the human rights defender was an associate professor in the English department of Delhi University, specializing in social justice, marginalized languages and linguistic identity. In July 2020, he was arrested in connection with the Bhima Koregan case, and detained at Taloja jail under the regressive anti-terrorism law, the Unlawful Activities Prevention Act (UAPA).

On 13 May 2021, Hany Babu, human rights defender jailed in connection with the Bhima Koregan case tested positive for Covid-19. A total of 16 defenders including Hany Babu have been jailed since 2018 in this case, linked to the violence that took place in Bhima Koregaon on 31 December 2017. On 11 May, family members of Hany Babu appealed to Indian authorities to provide him with immediate access to medical treatment. On 3 May, the human rights defender had developed a severe eye infection, which has impaired vision in his left eye, and spread to his cheek, ear and forehead. The human rights defender who was denied proper treatment for over a week is currently at GT Hospital in Mumbai. While his medical condition grows more precarious, family members are not receiving regular updated official information on his health. They have appealed for direct access, information and for the human rights defender to be transferred immediately to a multi-speciality hospital with the required expertise and facilities to treat his infection, and Covid-19.

Hany Babu is a human rights defender, an academic and a campaigner for the rights of Dalit and marginalized communities. At the time of his arrest, the human rights defender was an associate professor in the English department of Delhi University, specializing in social justice, marginalized languages and linguistic identity. In July 2020, he was arrested in connection with the Bhima Koregan case, and detained at Taloja jail under the regressive anti-terrorism law, the Unlawful Activities Prevention Act (UAPA).

The human rights defender began experiencing pain and swelling in his left eye around 3 May 2021, which caused impaired vision and severe pain. He was denied medical treatment by jail authorities until 7 May. Taloja jail is severely congested and prisoners lack access to clean water. Hany Babu was unable to even wash his wound and was forced to dress it with soiled towels. On 7 May, following an intervention from his lawyers, the human rights defender was eventually taken to a government hospital, where he was prescribed medication and advised to return in two days. Despite his condition deteriorating, and extreme pain, Taloja jail authorities failed to take him back to the hospital citing an alleged lack of escort staff.

Lawyers and family members of Hany Babu repeatedly appealed to the jail authorities to provide the human rights defender with treatment and basic facilities. On 10 May 2021, at least eight phone calls from Hany Babu’s lawyer to the Superintendent of Taloja jail were unanswered. On 13 May the defender was finally taken to JJ Hospital and later moved to GT Hospital in Mumbai where he is being treated. The family have not received official information regarding his health, from the National Investigation Agency, jail authorities or the State prosecutor. A relative was only informed by a nurse at the Hospital on 13 May evening, that he had tested positive for Covid-19.

Hany Babu’s condition is not unique; and is indicative of the suffering of inmates including human rights defenders held in Indian prisons, during the COVID-19 pandemic. The suffering of inmates such as Hany Babu and their families, is a reminder of what human rights defender Varavara Rao had to undergo in jail, despite being seriously ill, and testing positive for COVID-19.

Multiple applications for bail for those detained in the Bhima Koregan case, on medical grounds, and in light of the heightened risk to prisoners during the COVID-19 pandemic have been denied and/or are routinely delayed. Prison conditions and treatment of prisoners violates the most basic standards of dignity and humanity. Prisons are over-crowded and lack basic sanitation facilities. Families are denied access and information on the health and fate of loved ones. Despite the pandemic, treatment, sanitation, vaccines and test results are delayed and/or denied. In the case of Hany Babu, the delay of more than a week to obtain necessary medical treatment due to alleged staff shortages has placed the human rights defender at further and unnecessary risk. In his case, the infection increases the health risk posed by Covid-19 and requires specialized treatment.

Front Line Defenders is seriously concerned for the health and well-being of Hany Babu and believes that the failure of the authorities of Taloja Jail to provide him with prompt adequate medical care and basic facilities whilst detained has subjected the human rights defender to further risk and suffering, leading to a deterioration of his condition. We reiterate the call from family members for the defender to be shifted to a specialised treatment facility for Covid-19 and for his eye infection, and for family members to be kept informed immediately and at all times of his health status. Front Line Defenders condemns the treatment and detention without trial of Hany Babu, which the organisation believes is directly linked to his peaceful and legitimate human rights work.