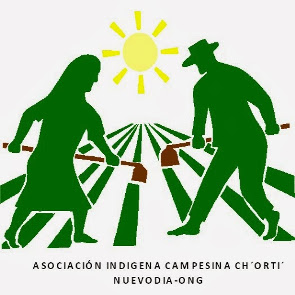 The Central Campesina Chortí Nuevo Día (Nuevo Día Ch’orti’ Indigenous Association, CCCND) works alongside indigenous Ch’orti’ communities in the region of Chiquimula, Guatemala. They provide legal support and visibility to the communities of Jocotán, Olopa and Camotán, who face threats and violations to land, environmental, and cultural rights, following to the implementation of hydroelectric and mining projects in their territories.

The Central Campesina Chortí Nuevo Día (Nuevo Día Ch’orti’ Indigenous Association, CCCND) works alongside indigenous Ch’orti’ communities in the region of Chiquimula, Guatemala. They provide legal support and visibility to the communities of Jocotán, Olopa and Camotán, who face threats and violations to land, environmental, and cultural rights, following to the implementation of hydroelectric and mining projects in their territories.

In October 2018, the CCCND began a protest against the Cantera los Manantiales, an antimony sulfide mine in Olopa linked to the companies Encamin, Minera Andinc, Construcciones Totales, and Puerto Santo Tomás. The mine continues its activities regardless of a municipal agreement that prohibits mining activities in the area where Maya-Ch’orti indigenous groups live, and did not respect their rights to free, prior and informed consent. Furthermore, the human rights organisation found indicators of money laundering in the companies’ procedures, and unsuccessfully demanded its closure from the authorities.

On 18 November, the CCCND organised an assembly where the municipality was asked to assist with the talks with the mining companies. On that day, a witness heard CCCND members’ whereabouts being shared over the phone by company informants. Previously, on 10 November, the CCCND organised a march from the communities towards the mining site, which was followed by an unidentified car. On the same day, a man connected to the mining company Encamin was seen offering 25 000 Quetzales to whoever agreed to kill CCCND member Ubaldino García.

Furthermore, on 5 November 2018, upon returning to Camotán from a meeting with the Ministry of Energy and Environment at the capital, where CCCND demanded the end of the mining extractivism in the region, CCCND coordinator Norma Sancir noticed a person circling her house, which she shares with Ubaldino García. On the same night, a motorcycle kept driving around the house. This was not the first time the defenders’ house was targeted: On 1 November 2018, the house was raided while they were asleep and their phones and money were taken. A report was filed on the matter with the Human Rights Division at the Public Prosecutor’s office.

CCCND director Omar Jerónimo was subject to intimidation attempts on several occasions in 2018. In March 2018, shots were fired against the organisation’s vehicle he was using. There were also home raids and workplace security breaches. Those incidents have been reported to the national police, who set up protection measures on his behalf.

On 21 November 2018, human rights defender, indigenous authority and CCCND member Elizandro Pérez was found dead in his bedroom. The exact circumstances of his death remain unknown. According to witnesses, he was followed by armed people who circled around his house moments before his death. The human rights defender also received phone calls and messages threatening his life. The case has been reported to the Public Prosecutor’s Office, who is investigating the circumstances of Elizandro Pérez’s death.

The CCCND is part of the Peasant Front (Frente Campesino), a network that allows local defenders and organisations to articulate and implement joint strategies for the defence of human rights in Guatemala. Other members of the network include CODECA and CCDA, who had, in total, 7 of their members killed between 9 May and 8 June 2018. The recent escalating harassment puts CCCND and its members at increased risk.

Front Line Defenders is deeply concerned about the harassment of human rights defenders and members of CCCND, as it believes that it is linked to their legitimate human rights work. Moreover, Front Line Defenders expresses further concern about the ongoing criminalisation of indigenous, environmental and land rights defenders as they work to protect their land and livelihood in Guatemala.