About Hadia Hasaballah
Status:
Released
About the situation 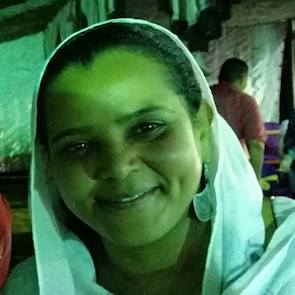 Demonstrations against the Sudanese government remain ongoing since they began on 19 December 2018. The demonstrators initially denounced the rising cost of living and shortages of food and fuel, but started calling for the resignation of President Omar Al Bashir following a violent response from the Sudanese authorities. Sudanese authorities continue to target human rights defenders and subject them to various forms of reprisals for their participation in the protests, as well as for their criticism of the government's violent crackdown on protesters.

On 19 February 2019, women human rights defenders, Wefag Gorashi and Wafaa Gorashi, were verbally attacked, beaten, and detained by the National Intelligence and Security Services (NISS) after they entered a store in the centre of Khartoum. Both human rights defenders have been very involved in the protests.

Wefag Gorashi is a student rights activist and the leader of several youth groups in Khartoum. She is a member of the Khartoum University Student Committee, which works to organise peaceful protests, mainly aimed at the banning of all forms of violence and weapon-carrying in the university. Her sister, Wafaa Gorashi, is a woman human rights defender, doctor, and member of the Sudanese Doctors Committee which is the professional labour union of doctors in Sudan. The Committee has actively supported the right of the protesters to peacefully demonstrate and has denounced the violence of the security forces in hospitals.

On 19 February, Wefag Gorashi and Wafaa Gorashi were verbally attacked by NISS agents after they entered a store in the centre of Khartoum. When the defenders asked the agents why they were targeting them, the agents used electric shock batons on them. Both defenders were dragged out of the store, put in an NISS vehicle and taken to NISS headquarters, where they were questioned for several hours. An arrest warrant was issued for Wefag Gorashi, while Wafaa Gorashi was released. Wefag Gorashi, who is due to be married on Friday 22nd February, remains in incommunicado detention in NISS headquarters. Her family have reason to believe that she will be transferred to the Women’s Prison in Omdurman. No formal charges have been brought against her.
Wefag Gorashi and Wafaa Gorashi are two of many human rights defenders that have been arrested by the Sudanese security forces in recent weeks. On 19 February, security forces arrested Hadia Hasaballah, a woman human rights defender and lecturer at Al Ahfad University in Omdurman. Her husband, Hisham Omar Alnour, who is also a human rights defender, was arrested on 1 January 2019. Hadia Hasaballah had previously been arrested on 2 February and released some days later.

On 16 February, human rights defender Ghazi Elrayah Alsanhouri disappeared in Khartoum. He had been engaged in the ongoing protests and is a member of a number of organisations, including Mojaddidon and Sharalhwadth, which work to treat injured protesters pro bono. The last known contact with him was when he called his father to ask him to bring his identification to a meeting point near Saida Sanhori Mosque. However, he did not ultimately show up at the meeting point. His family have continued to search for him in police stations and detention centres in the city, but his whereabouts remain unknown.

On 28 January, woman human rights defender and school teacher Khalida Saber was arrested in the city of Port Sudan while she was on a bus on her way to school. She was transferred to Khartoum on 2 February, where she has been held incommunicado ever since.

Montassir Ibrahim, a human rights defender and the coordinator of the Sudanese Initiative for Rights and Liberties, was conditionally released on 15 February. He had been arrested on 7 February while participating in a protest in Khartoum. The State Security Prosecution subsequently charged him with ‘rebellion’ under article 67 of the Criminal Code, ‘inciting people to protest’ under article 63, and ‘disturbing the peace’ under article 69. The human rights defender began a three-day hunger strike after he was denied access to a lawyer. He was held in incommunicado detention in NISS headquarters, before being transferred to Mawqif Shandi Detention Center on 10 February.

Many of those who were arrested in the crackdown have stated that they were denied access to their lawyers and their families, while many others have reported being subjected to torture and ill-treatment at the hands of the NISS.

Front Line Defenders strongly condemns the ongoing violence and repression by the authorities and the unlawful arrests, which continue to target activists and human rights defenders.