About Pablo Chargonia
Status:
Received death threats
About the situation

On 28 January 2017, the Prosecutor of the Supreme Court of Justice in Uruguay, Jorge Díaz, received an email from a group called “Comando Gral. Pedro Barneix”. In the email, the group issued death threats against thirteen people, including one state authority, two justice operators, and ten human rights defenders working on cases concerning mass atrocities committed during the dictatorship in Uruguay. A year has passed but the investigation has not yet produced any results, despite the complaints made to the authorities by those affected. 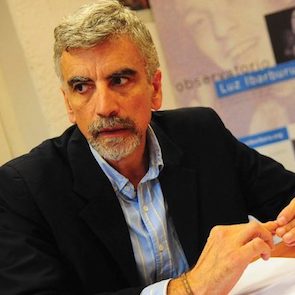 Dr. Pablo Chargoñia is a lawyer who specializes in cases of state terrorism, he works on legal proceedings for crimes against humanity and support for victims since 2000. In Uruguay, impunity persists for grave human rights violations committed during the dictatorship (1973-1985), partly due to military intelligence services protecting perpetrators of crimes. In recent years, Pablo has been threatened as a result of his work. In February 2017, self-proclaimed "Barneix Command" threatened to kill 13 people HRDs including Dr. Chargoñia. The case motivated the concern of the Inter-American Commission on Human Rights. The Uruguayan justice system has not been able to identify the perpetrators of the threats and the Uruguayan State has not adopted any measures of protection for these human rights defenders. Dr Pablo Chargoñia has been in a member of Observatorio "Luz Ibarburu", a network of social organizations in Uruguay whose purpose is to promote criminal cases for violations of human rights committed during the Uruguayan dictatorship, and to spread information about them.

On 28 January 2017, the Prosecutor of the Supreme Court of Justice in Uruguay, Jorge Díaz, received an email from a group called “Comando Gral. Pedro Barneix”. In the email, the group issued death threats against thirteen people, including one state authority, two justice operators, and ten human rights defenders working on cases concerning mass atrocities committed during the dictatorship in Uruguay. A year has passed but the investigation has not yet produced any results, despite the complaints made to the authorities by those affected.

Pablo Chargoñia, Louis Joinet, Jair Kirshke, Belela Herrera and Francesca Lessa are amongst those who received death threats and are human rights defenders from Observatorio Luz Ibarburu, an organisation which follows and supports criminal complaints regarding human rights violations that took place during the dictatorship in Uruguay and advocates for their effective compliance. Juan Errandonea, Óscar López Goldaracena, Federico Álvarez Petraglia, Juan Fagúndez, and Hebe Martínez Burlé were also subjected to death threats and have worked independently representing victims in cases of human rights violations, such as torture, sexual abuse and extra-judicial executions, during the dictatorship in Uruguay. Also affected were the current Uruguayan Defence Minister, Jorge Menéndez, the Prosecutor of the Supreme Court of Justice in Uruguay, Jorge Díaz and the Director of the National Human Rights Institute of Uruguay, Mirtha Guianze, who as a prosecutor filed an appeal challenging the amnesty law over a murder committed during the dictatorship.

The death threats were sent via e-mail and state that “the suicide of General Pedro Barneix will not remain unpunished.” General Pedro Barneix, who was appointed to investigate detentions and disappearances during the dictatorship, committed suicide on 2 September 2015. Prosecutor of the Court Jorge Díaz, one of the people who received two e-mail threats, reported that the message states: “No more suicides or unjust prosecutions will be accepted. From now on, for every suicide we will kill three people selected at random from the following list.” The messages were sent using a technological platform called TOR that makes them difficult to trace as they go through several servers located in different countries.

Although a year has passed, the Uruguayan government has not provided information regarding the status of investigations into these threats or the people responsible of them. Furthermore, investigations have been limited and insufficient and, crucially, the State has not provided any protective measures for the recipients of the death threats.

Francesca Lessa left Uruguay as there were no security measures in place to guarantee Francesca’s personal safety to continue her work in the country.

Many organisations at national and international level have condemned these death threats. On 1 March 2017, the Inter-American Commission on Human Rights (IACHR) expressed concerned in a press release and urged Uruguay to adopt urgent measures to ensure their safety. Moreover, on 25 May 2017, the IACHR held a public hearing to discuss the threats and justice in Uruguay, however the Uruguayan delegation did not attend the meeting. The absence of the Uruguayan delegation was qualified as “worrying” by the IACHR.
There is an emerging pattern of death threats against those, including defenders, working on cases related to gross human rights violations committed during the dictatorship in Uruguay. In 2016 unknown individuals robbed information and evidence from the Forensic Anthropology Research Group at the Republic University (Grupo de Investigación en Antropología Forense de la Universidad de la República). The research group had been conducting excavations of the bodies of detainees and enforced disappearance victims during the dictatorship. The group of anthropologists that work at the University also received death threats. Moreover, in October 2017, unknown individuals tried at least twice to access the areas where anthropologists were conducting excavations of enforced disappearance victims’ bodies at Battalion 13 and the Anti-aircraft Artillery Group No. 1. Additionally, on 18 November 2017, Jorge Díaz received another death threat from a group called “Comando de Restauración Nacional.” They call him and said “you are going to die in the street”. These incidents have not been properly investigated or sanctioned by Uruguayan authorities.

Front Line Defenders urges the authorities in Uruguay to:

3. Guarantee in all circumstances that all human rights defenders in Uruguay are able to carry out their legitimate human rights activities without fear of reprisals and free of all restrictions.