About Ehisler Vásquez
Status:
House searched
About the situation

On 10 May 2017, human rights defender Ehisler Vásquez had his house searched by members of the Cuerpo de Investigaciones Científicas, Penales y Criminalísticas – CICPC (Criminalistic, Penal and Scientific Investigation Body), in Barquisimeto, Lara, Venezuela. The authorities did not disclose why the search warrant was issued. 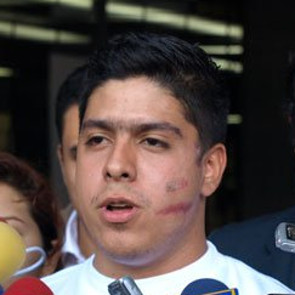 Ehisler Vásquez is the founder of Asociación Civil Fuerza, Unión, Justicia, Solidaridad y Paz – FUNPAZ (Civil Association Strength, Union, Justice, Solidarity and Peace), in Barquisimeto, Lara. The Association was created in response to repressive acts carried out by the Guardia Nacional Bolivariana - GNB (Bolivarian National Guard) on 15 and 16 April 2013, when the human rights defender was shot five times by the authorities while participating in a peaceful demonstration in Barquisimeto. Ehisler Vásquez has since been operated on four times but has not fully recovered. He lodged complaints with the Public Prosecution of Venezuela over the shooting and for the past four years has been struggling to bring the GNB to justice. The human rights defender has also worked with FUNPAZ to challenge the impunity of the state’s security forces in Lara.

On 10 May 2017, human rights defender Ehisler Vásquez had his house searched by members of the Cuerpo de Investigaciones Científicas, Penales y Criminalísticas – CICPC (Criminalistic, Penal and Scientific Investigation Body), in Barquisimeto, Lara, Venezuela. The authorities did not disclose why the search warrant was issued.

On 10 May 2017, at approximately 7.00am, members of CICPC arrived at Ehisler Vásquez’s home in possession of a search warrant. They stated that the objective behind the search was to find any indications of criminal activity. The authorities searched the house and rummaged through the belongings of all those present. When asked about the grounds for the search warrant, members of CICPC responded that they did not know.

When the search concluded, Ehisler Vázquez, accompanied by his relatives, went to the First Public Prosecutor's Office in an attempt to verify the reasons for the search. While there, they talked to the Prosecutor, Maria Vásquez, who indicated that she had requested the search warrant and that if any incriminating evidence was found against him, she would formally charge him. No further explanations were given.

The Lara State has experienced high rates of military and paramilitary activity, and equally high rates of impunity. Since 2012, the State has been governed by Avanzada Progresista (Progressive Advance), an anti-Chavista party, opposed to the federal government of the United Socialist Party of Venezuela (PSUV). The former governor of the State and member of PSUV, General Luis Reyes Reyes, who has held positions in the national executive, is currently president of CORPOLARA, a corporation created and sponsored by the federal government. CORPOLARA has powers parallel to the government of the state, such as improving, evaluating and controlling public administration, administering public resources, and implementing public policies. CORPOLARA has been acting under the umbrella of the federal government and, along with the Commander of the Zona Operativa de Defensa Integral de Lara (Defence Operative Zone of Lara), José Rafael Torrealba, is blamed by human rights defenders for being responsible for excessive use of force and violations committed by the military and paramilitary troops.

Since 19 April 2017, the Venezuelan government has been implementing ‘Plan Zamora’, a military plan to enforce strict surveillance, monitoring and patrolling in specific regions of the country. The enforcement of the Plan in several areas of Venezuela has resulted in mass arrests and in civilians being accused of and tried for military crimes, such as insubordination, in military courts. The region of Lara is one of the most affected by the military and police actions.

Recent mass protests at the national level have generated a series of mobilisations and demonstrations, including in Barquisimeto, which have been disproportionately suppressed by the GNB. In some cases, the GNB has been assisted by armed civilians to carry out operations during the hours of darkness in residential areas.

Several organizations and human rights defenders, including FUNPAZ and Ehisler Vásquez, have been monitoring the situation in the region and denouncing the acts of violence committed by the authorities.

Front Line Defenders has previously reported on violations carried out against human rights defenders in Lara, Venezuela. On 8 May 2017, while in Barquisimeto, Lara, the house of human rights defenders Yonaide Sanchéz and Nelsón Freitez was broken into for the third time and their belongings were rifled through by unidentified persons. The invaders left a pickaxe and two knives in the dining area, as a means of intimidating the defenders.

Front Line Defenders is concerned by the acts carried out against Ehisler Vásquez, as well as against other human rights organisations and defenders in Venezuela, and it believes the acts against them are directly linked to their legitimate work in the defence of human rights. Front Line Defenders is further extremely concerned with the general situation in Venezuela, especially in Lara, including the state of emergency currently in force, and the numerous reports of ongoing violations against human rights defenders.

Front Line Defenders urges the authorities in Venezuela to:

1. Immediately cease all further harassment of Ehisler Vásquez and his family;

2. Take all necessary measures, in consultation with the human rights defender, to guarantee his physical and psychological integrity and security;

3. Guarantee in all circumstances that all human rights defenders in Venezuela are able to carry out their legitimate human rights activities without fear of reprisals and free of all restrictions.