Detention & Threat of Deportation of Nepalese Domestic Workers and HRDs

On 15 December 2016, an urgent matters judge in Beirut notified the Lebanese General Security of the court’s decision to prohibit the deportation of Ms Roja (Rose) Limbu for two weeks until a court decision is made regarding her request to be assigned a defense lawyer. The human rights defender has been in detention since 5 December 2016 and has been denied legal representation and visits by civil society organisations. 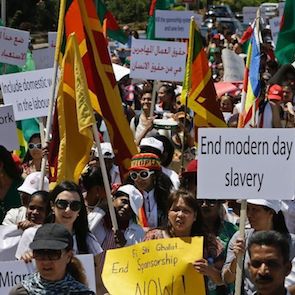 Rose Limbu is a Nepalese migrant worker in Lebanon, as well as a board member of the Domestic Workers’ Union in Lebanon. In this role she advocates for the rights of migrant workers in Lebanon, many of whom are subjected to exploitative labour practices.

On 15 December 2016, an urgent matters judge in Beirut notified the Lebanese General Security of the court’s decision to prohibit the deportation of Ms Roja (Rose) Limbu for two weeks until a court decision is made regarding her request to be assigned a defense lawyer. The human rights defender has been in detention since 5 December 2016 and has been denied legal representation and visits by civil society organisations.

On 15 December 2016, the urgent matters judge in Beirut notified the Lebanese General Security (LGS) of their decision on 14 December to issue a two week ban on the deportation or Rose Limbu until a decision is made by the court regarding her request for access to legal counsel.  The urgent matters judge gave the Lebanese General Security one week to submit comments regarding the case.

On 5 December 2016, Rose Limbu was arrested at her employer’s home. The human rights defender has not been informed of the reasons for her arrest. Rose Limbu is legally authorised to work in Lebanon and is in possession of the appropriate immigration documents. Since her arrest and detention on 5 December 2016, the LGS have refused to grant Rose Limbu access to legal counsel. In light of this, the National Federation of Workers and Employees Trade Unions in Lebanon (FENASOL) submitted a request on her behalf for legal counsel based on concerns that Rose Limbu’s arrest is directly linked to her engagement with the Migrant Workers’ Union.  Civil society organisations and various lawyers have expressed concern that she could be deported without reason, or access to legal counsel like her recently deported colleague, Sujana Rana.

In a parallel case, on 10 December 2016, Lebanese authorities deported Sujana Rana, who  is also a Nepalese migrant worker who was involved in the struggle for the rights of migrant domestic workers. She was arrested by the members of the Lebanese general security agency at her employer’s home on 30 November 2016. The general security agency did not allow her to call a lawyer, and reportedly questioned her about her involvement in activism for the rights of migrant domestic workers. Sujana Rana was never informed of the reason for her arrest and was subsequently deported despite having had all the appropriate papers and authorisation to work in Lebanon.

There are an estimated 250,000 migrant domestic workers in Lebanon who are excluded from labour law protections and benefits. Migrant domestic workers in Lebanon are systematically subjected to bureaucratic procedures referred to as kafala that tighten immigration rules for migrant workers by requiring sponsorship in order to work in the country. Due to the nature of this sponsorship program, migrant workers do not have job security, which makes them vulnerable to exploitation from their employers.

Front Line Defenders condemns the arrest and detention of Rose Limbu, and is concerned by the risk of her deportation, as it believes these actions to be connected to her legitimate and peaceful human rights activities in Lebanon.

Front Line Defenders urges the authorities in Lebanon to:

1. Immediately and unconditionally release human rights defender Rose Limbu and cease any further judicial harassment against her, including deportation;

2. Ensure that human rights defenders working on migrant worker rights can register their organisations and carry out their peaceful and legitimate activities legally and without hindrance;

3. Guarantee in all circumstances that all human rights defenders in Lebanon are able to carry out their legitimate human rights activities without fear of reprisals and free of all restrictions.

Last week, Lebanese authorities arrested Nepalese human rights defenders Ms Rose Limbu and Ms Sujana Rana who are active members of the Migrant Domestic Community in Lebanon. The two women were taken from their employers' houses and remain detained to this day by the Lebanese General Security. Visitation of the human rights defenders has not been allowed.

Sujana Rana is facing deportation on 10 December and the fate of Rose Limbu remains unknown.

It is feared that the arrest of the two human rights defenders has come as part of a crack down on the migrant community in Lebanon that has been active in calling for the right to form associations and to be recognised as workers within Lebanese law. Several members of the migrant community has also been active in challenging the sponsorship system in Lebanon as well.