About Biram Dah Abeid
Status:
Released
About the situation

On 17 May 2016, the Supreme Court of Mauritania ruled for the immediate release of anti-slavery human rights defenders Mr Biram Dah Abeid and Mr Brahim Bilal Ramdhane.

Biram Dah Abeid is a Mauritanian human rights defender and President of the anti-slavery NGO Initiative pour la Résurgence du Mouvement Abolitionniste (IRA). The human rights defender is a descendant of former slaves, and has worked all his life to change the culture of impunity regarding slavery in Mauritania. He is targeted by the authorities because of his work and criticism of the seeming lack of effort by the government to end slavery and trafficking. In 2013, Biram Dah Abeid received the Front Line Defenders Award for Human Rights Defenders at Risk as well as, subsequently, the UN Human Rights Prize.

On 17 May 2016, the Supreme Court of Mauritania ruled for the immediate release of anti-slavery human rights defenders Mr Biram Dah Abeid and Mr Brahim Bilal Ramdhane.

Biram Dah Abeid and Brahim Bilal Ramdhane are respectively President and Vice President of Initiative pour la Résurgence du Mouvement Abolitionniste - IRA (Initiative for the Resurgence of an Abolitionist Movement), an organisation that works for the eradication of slavery in Mauritania. In 2013, Biram Dah Abeid received the Front Line Defenders Award for Human Rights Defenders at Risk as well as, subsequently, the UN Human Rights Prize.

In the ruling on 17 May 2016, the Supreme Court judge noted that the charges brought against the two human rights defenders should incur a maximum one year prison sentence. Biram Dah Abeid and Brahim Bilal Ramdhane were arrested and arbitrarily detained on 11 November 2014. The human rights defenders were sentenced to two years imprisonment on 15 January 2015 on charges of “illegal assembly and rebellion”, “encouraging rebellion” and “refusing to comply with the orders of administrative authorities”. As they had already served an eighteen-month sentence, the judge ruled for their immediate release. 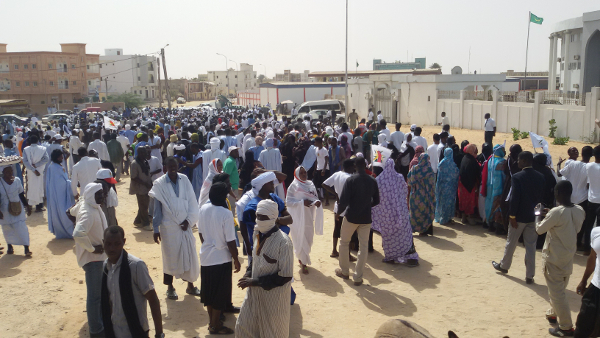 The hunger strike was ended when the prison authorities agreed to remove the restrictions on visits, and allow the human rights defenders access to their legal representatives, spouses and other visitors, in the presence of prison guards. The human rights defenders have also been permitted to use an outdoor space for exercise, and a number of objects, previously confiscated, were returned.

Separately, the verdict of the Criminal Court of Nouakchott in the case against three other members of IRA detained in Nouakchott Prison, Dr Saad Louleyd, Ms Mariem Cheikh and Mr Yacoub Moussa, is awaited on 7 March 2015. During the trial, the Public Prosecutor requested three years' imprisonment against the three human rights defenders, in addition to a 540,000 Mauritanian Ouguiya fine (approximately €1630) and the restriction of their civil rights for five years following the completion of their prison sentence. The three human rights defenders were arrested for denouncing slavery and the practices of slave owners. On 14 February 2015, Saad Louleyd was admitted to hospital for aggravated diabetes due to the lack of medical care provided by the Nouakchott prison administration. Mariem Cheikh was the victim of acts of torture in the Sebkha women's prison on 14 January 2015.

On 15 January 2015, human rights defenders Messers Biram Dah Abeid, Brahim Bilal Ramdhane and Djiby Sow were sentenced to two years' imprisonment for charges relating to their participation in a caravan of protest calling for the final abolition of slavery in Mauritania.

Their colleagues, who faced the same charges, were acquitted. Biram Dah Abeid and Brahim Bilal Ramdhane remain in detention, while Dijby Sow was released under judicial control on 14 November 2014.

The Court sentenced each of the three defenders to two years' imprisonment on charges of “illegal assembly and rebellion”, “encouraging rebellion” and “refusing to comply with the orders of admistrative authorities.” Their lawyers have appealed the conviction. The human rights defenders' colleagues, Messrs. Sabbar Hussein, Khattri Rahel, Dah Boushab, Abidine Matalla, Samba Diagana, and Mahmoud Hassan, were acquitted. Sources confirm that the police used batons and tear gas to disperse a protest staged by IRA members against the conviction.

24 December 2014 marked the opening of the trial of human rights defender Mr Biram Dah Abeid and his co-detainees at the tribunal of Rosso. After five days of pleadings by the defence lawyers, the Prosecutor called for a 5-year jail term, a sentence which carries with it a curtailment of civil rights after the sentence is served. A verdict is due to be pronounced on 15 January 2015.

On 11 November 2014, Biram Dah Abeid and eight of his colleagues from IRA were arrested and charged in Rosso, following their participation in a caravan of protest organised by the IRA and other NGOs calling for the abolition of slavery in Mauritania. They are accused of "illegal assembly and rebellion", "encouraging rebellion" and "refusal to carry out orders given by the administrative authorities". Front Line Defenders launched an urgent appeal on 12 November 2014.

Their trial, initially scheduled to open on 18 December 2014, was postponed to 24 December 2014 upon request by the defence lawyers. The lawyers denounced that their defendants' rights and the notification deadlines had been violated, as they were informed less than 24 hours before the opening of the trial.

On 24 December 2014, the trial started at around 3pm in the presence of around 25 lawyers. It is reported that on the eve of their hearing, the human rights defenders were deprived of sleep and subjected to a night search that lasted for approximately five hours (i.e. from 10:30 pm to 3:30 a.m.). Biram Dah Abeid was the first to be called before the bar, and denied all of the charges. He particularly denounced the fact that, although the caravan had been organised by several organisations, the arrests had only targeted Haratines, who are the main victims of slavery.

The trial carried on during the following four days with the pleadings of the other detainees, who all denied the charges against them. Defence lawyers denounced that the Prosecution did not provide any evidence to support the charges. On 29 December, the Prosecutor called for 5 years imprisonment against Biram Dah Abeid and his colleagues, and requested the seizure of all equipment of the organisation IRA.

On the final day of the pleadings, 31 December 2014, the judge decided to pronounce his verdict on 15 January 2015. The defence lawyers requested provisional release for the detainees, however their request was objected to by the Prosecutor.

Front Line Defenders remains extremely concerned at the charges against Mr Biram Dah Abeid and his fellow human rights defenders from the Initiative for the Resurgence of the Abolitionist Movement (IRA) amid reports that their right to a fair and transparent trial has been breached. Front Line Defenders strongly calls on the authorities to comply with due process and legal procedure in accordance with international standards.

On 17 December 2014, Biram Dah Abeid and his imprisoned colleagues,, were informed, that their trial would be held the following day, 18 December 2014, in Rosso. Neither the defendants nor the lawyers were informed of the trial date in advance. Following the announcement of the trial date, a peaceful march was organised by members of IRA and supporters of the campaign for the abolition of slavery, which wentfrom the prison in Rosso to the Court to demand that it uphold the right to a fair trial.

On 11 November 2014, Biram Dah Abeid and eight of his colleagues from IRA were charged and held in pre-trial detention in the prison in Rosso, following their participation in a caravan of protest organised by the IRA and other NGOs calling for the abolition of slavery in Mauritania.

Given the short notice of their hearing, Biram Dah Abeid and the other imprisoned members of IRA immediately wrote a letter to the Head of the Court in Rosso in which they stated that they would refuse to appear at the court hearing and demanded that their right to a fair trial be respected. In response to their letter, the judge decided to postpone the trial until 24 December 2014.

Members of IRA-Mauritania strongly believe that the authorities deliberately gave such short notice of the trial date as they wished to hold the trial without the presence of national and international observers. Front Line Defenders reiterates its belief that Biram Dah Abeid and his colleagues have been charged solely on the basis of their legitimate and peaceful human rights work in Mauritania.

On 11 November 2014, human rights defender Mr. Biram Dah Abeid and at least eight other anti-slavery campaigners were arrested by police and are currently being arbitrarily detained.

Seven of the human rights defenders are members of the Initiative for the Resurgence of the Abolitionist Movement in Mauritania - IRA, an organisation that works to eradicate slavery in Mauritania. Biram Dah Abeid received the 2013 Front Line Award for Human Rights Defenders at Risk.

“The arrest of Biram Dah Abeid underscores the hypocrisy of the government of Mauritania which promises to the world that it is working to end slavery but uses every opportunity to harass, undermine and intimidate those, like Biram Dah Abeid and the Members of IRA, who are actually working to end this abhorrent practice” said Mary Lawlor Executive Director of Front Line Defenders in Dublin today.

It is also reported that since their arrest, their phones have been confiscated, and they are now isolated with no contact with the outside world and unable to speak to a lawyer. The information received indicates that some of them are being held at the police and others in the direction of safety.

On the evening of November 11, 2014, Dr Saad Louleyd, spokesman for the IRA, was also arbitrarily arrested. It is unclear where he is currently being held. The headquarters of the IRA has been closed by the police without any explanation following orders to not allow anyone into the headquarters of the organisation.

Since November 7, 2014, the IRA members have been crossing the country, from village to village, and holding conferences to denounce 'property slavery,' a system that transforms members of the Haratines community into labourers on their own ancestral lands.

Two weeks ago, a wave of arrests and judicial harassment against members of IRA had already occurred. On October 31, during prayers by the Mufti of the Grand Mosque in Nouakchott, Mr. Sabbar Hussein, a member of the IRA, publicly denounced land exploitation and slavery in which the mufti was involved. Immediately following this, plain-clothed police officers pounced on him, but those present forced the police to withdraw. The next day, Sabbar Hussein was arrested by the police and was missing for three days. He was later found by his colleagues in the custody of the judicial police in Nouakchott. During the night of Sunday, November 3, three other IRA members were also arrested by police as they left the mosque of the Nobles, where they, too, responded to a violent statement by the Imam against the IRA. On November 3, the Mauritanian public prosecutor lodged the following charges: disruption of prayer; incitement to hatred; and rebellion against authority. Mr. Sabbar Hussein remains in jail while the others were released but placed under judicial control.