About David Sheen
Status:
Facing defamation allegations
About the situation

The first pre-trial hearing of David Sheen has been rescheduled from 18 September 2017 to 9 November 2017. The independent journalist is facing a civil suit for “liable defamation” at the Tel Aviv Magistrate Court in relation to an article on the issue of hate speech and discriminatory policies against populations of African origin in Israel. 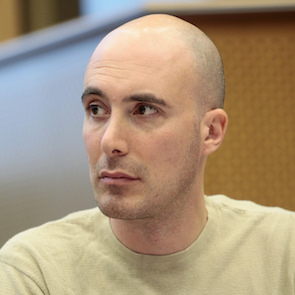 David Sheen is an independent journalist and film-maker originally from Toronto, Canada who began blogging when he first moved to Israel in 1999. David Sheen has also worked as a reporter and editor at the Israeli newspaper Haaretz. He has written on discrimination of African populations in Israel, the Israeli military occupation of Palestinian territories, and discriminatory policies against Palestinians in Israel. The human rights defender’s current work focuses on racial tensions and religious extremism within Israeli society.

On 18 September 2017, a pre-trial hearing will be held in the civil suit against independent journalist David Sheen for “liable defamation” at the Tel Aviv Magistrate Court. The civil suit is in relation to an article the human rights defender wrote regarding discriminatory practices against populations of African origin. David Sheen faces a fine of 750,000 NIS (approximately 200,000 USD) if found liable.

The pre-trial hearing for the civil suit is scheduled for 18 September 2017, at the Tel Aviv Magistrate Court. If the civil case is not dropped, further court proceedings are expected to take place in November 2017. In March 2017, David Sheen was notified in writing of a pending lawsuit against him by a former Israeli general for “liable defamation” in connection with an article he published in January 2017. The article addressed the issue of hate speech and discriminatory policies against populations of African origin, particularly refugees from Africa. The article highlighted the discriminatory language and actions of ten individuals, including the plaintiff. The allegations of the lawsuit cite the aforementioned article, as well as tweets by David Sheen to promote it, as the basis of defamation. The journalist and human rights defender faces a fine of 750,000 NIS (approximately 200,000 USD) if he is found liable of defamation.

Front Line Defenders condemns the judicial harassment of journalist and human rights defender David Sheen, as it believes he is being targeted for his legitimate human rights activities.

1. Drop the civil suit against David Sheen, as Front Line Defenders believes that he is being targeted for the legitimate exercise of his freedom of opinion and expression;

2. Guarantee in all circumstances that all journalists and human rights defenders in Israel are able to carry out their legitimate human rights activities without fear of reprisals and free of all restrictions.