About Soum Chankea
Status:
Judicial Harrassment
About the situation

On 16 December 2015, the Banteay Meanchey Provincial Court questioned Mr Soum Chankea over his alleged leadership of the peaceful protest that took place on 14 December 2015 in Poipet city. 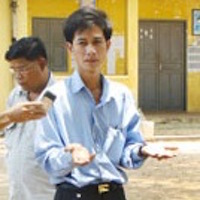 Soum Chankea is a provincial coordinator for the Banteay Meanchey province at the Cambodian Human Rights and Development Association (ADHOC). The organisation was founded in 1991 to monitor the development and protection of human rights, in particular of land and natural resources rights. ADHOC provides legal assistance to victims of land evictions and engages in land rights advocacy through press statements and conferences, publication of thematic reports and cooperation with the National Human Rights Commission.

On 16 December 2015, Soum Chankea presented himself at the Banteay Meanchey Provincial Court for questioning following two summons received on the same day. The human rights defender was questioned over his role in the peaceful demonstration that took place on 14 December 2015 in Poipet City. The demonstration was organised by the local community, which faces an impending removal from its lands, that were allocated by the government for the construction of a railway. The demonstration was deemed to be illegal by the local government. Soum Chankea informed the court that he had solely monitored the demonstration and had not been involved in it in any other way.

On 16 December at 10:12am, the Banteay Meanchey Prosecutor's Office issued a summons to Soum Chankea, giving him only one hour to present himself for questioning before the competent authorities. The human rights defender sent a letter to the court asking for a postponement. Despite that, police officers appeared at his office at 2:30pm with another summons, ordering him to come to the Banteay Meanchey Provincial Court the same afternoon.

Both summons did not have a clear legal basis and were issued in violation of the Cambodian criminal procedural law, according to which a summons has to be issued 5 days prior to the claimed day of appearance. The person concerned has to be granted enough time to seek legal representation and counselling, and to prepare for the day of appearance. Moreover, both summons were signed by the provincial prosecutor. According to the Cambodian Criminal Code of Procedure the prosecutor is not competent to issue orders for a person to appear in court, only an investigative judge has the competence to do so.

Previously, on 14 December 2015, the day of the protest, the police officers also got in contact with Soum Chankea ordering him to stop the demonstration. The human rights defender refused to do so, being convinced that the community has the right to peacefully protest against the government's decision to evict them from its lands.

On 8 May 2012, Ms Sokumtheary Yin issued a warrant to drop the criminal complaint against Mr Soum Chankea, land rights and human rights defender and Banteay Meachey Provincial Coordinator for the Cambodian Human Rights and Development Association.

On 9 February 2012, a summons was issued against the human rights defender by the Court to investigate whether a complaint made against him by Mr Oum Socheath, Director of Banteay Meanchay branch of the Cambodian Mine Action Centre, fell under Article 311 of the Penal Code, which is punishable by one month to one year imprisonment and a fine of between 100,000 (€ 19) to 2 million Riels (€ 374).

The summons was related to ADHOC's intervention in the case of two incidents of reported sexual harassment carried out by Oum Socheath in November 2011. The victim of the assault lodged a complaint with the Cambodian Human Rights and Development Association(ADHOC), which provided her with legal advice and helped her file a complaint with the police, urging them and the Prosecutor's office to take action and open an investigation into the case.

On 20 February 2012, Soum Chankea was due to appear for questioning at the Prosecutor's office at Sisophon Provincial Court, which could bring a formal charge of Slanderous Denunciation under Article 311 of the Penal Code against him. On that date, the matter was postponed and the questioning has been rescheduled for 22 March 2012. The charge is punishable by a term of between one month and one year imprisonment and a fine of between 100,000 (€ 19) to 2 million Riels (€ 374).

On 9 February 2012, a summons was issued against the human rights defender by the Sub-Prosecutor in Sisophon, Banteay Meanchay Province. The summoning is reportedly related to ADHOC's intervention in a case of a waitress reporting sexual harassment and sexual molestation allegedly by Oum Socheath and another individual, Mr Thong Piseth. The victim filed a complaint with the Provincial Police Commission relating to two sexual assaults that took place on 3 and 8 November 2011, however no further action has been undertaken by police. The victim lodged a complaint with ADHOC which provided her with legal advice, and Soum Chankea helped her file a complaint with the police, urging them and the Prosecutor's office to take action and open an investigation into the case.

According to information received, a letter of intervention was sent to the Prosecutor in Sisophon by Mr Hun San, brother of Cambodia's Prime Minister Mr Hun Sen, asking him not to investigate the allegation against Oum Socheath. Oum Socheath had previously threatened the victim and told her they were protected by high-ranking people.

The summoning of Soum Chankea comes in the context of an increase in criminal charges being brought against human rights defenders, particularly those involved in the protection of women and children. It is the third time that ADHOC staff have been threatened with charges of defamation and incitement.