About Ruki Fernando
Status:
At work
About the situation

On 30 June 2015, the Colombo Magistrate Court removed the overseas travel ban that had been imposed on human rights defender Mr Ruki Fernando in March 2014. Because of his work, Ruki Fernando has faced several threats and attacks, and he was forced to live in exile for several months. 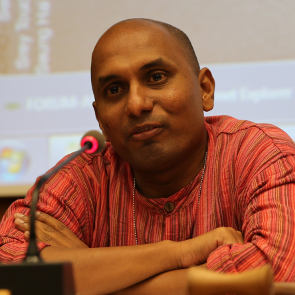 The removal of the travel ban on Ruki Fernando followed a written submission for their lifting, filed in November 2014, and months of discussion with the Sri Lankan Attorney General's department. The restrictions had been put in place in March 2014, at the request of the Terrorist Investigation Department (TID). The measures required the human rights defender to seek permission through the Sri Lankan court system for overseas travel.

The TID investigation of Ruki Fernando continues, along with a gag order restricting the human rights defenders contact with national and international media. The announcement of the investigation into Ruki Fernando and the speaking order against him came on 21 March 2014, after he had been arrested the previous week upon visiting the detained human rights defender Ms Balendran Jayakumari.

21 March 2015 marked one year since restrictions were imposed on the freedom of expression and movement of human rights defender Mr Ruki Fernando, an adviser to INFORM, a human rights documentation centre in Colombo. At the request of the Terrorist Investigation Department (TID), the human rights defender and his colleague, Fr Paveen Mahesa, were restricted from speaking to international media and ordered to give sim cards and computers to police.

Ruki Fernando's human rights activities have been constrained by the need to obtain court permission in order to travel outside Sri Lanka. On 8 January 2015, for example, the human rights defender was reportedly delayed at the airport when he attempted to travel to a human rights conference and forced to travel the next day, despite having obtained a court order permitting his travel. On other occasions, he has faced questioning by the Immigration and State Intelligence Service officers.

When the travel restriction was ordered, the police stated that the conditions were imposed because Ruki Fernando was under investigation regarding an incident in Killinochi, the details of which could not be made public. Ruki Fernando and Paveen Mahesa had been arrested on 16 March 2014 and released on 19 March, after visiting the Killinochi region to investigate the detention of human rights defender Ms Balendran Jayakumari. Ruki Fernando had subsequently given interviews to local and international media regarding his arrest and Balendran Jayakumari's case. Balendra Jayakumari remained in detention for a year, but was recently released on bail. The human rights defender is also subject to travel restrictions.

Following his arrest, Ruki Fernando was the subject of a smear campaign, with a number of media outlets and Sinhalese nationalist groups declaring the human rights defender to be a traitor and a supporter of terrorists.

11 August 2014
Meeting of Families of the Disappeared disrupted, human rights defenders intimidated and targeted in a smear campaign

uman rights defender Ms Nimalka Fernando, President of the International Movement against All Forms of Discrimination and Racism (IMADR), was summoned and interrogated by police on 6 August 2014. The previous day, officers claiming to be from the Police Criminal Investigation Department had visited Mr Britto Fernando, the President of the Association for Families of the Disappeared, at his office in Negombo and had inquired about him. These incidents follow the violent disruption of a meeting of the Association for Families of the Disappeared held on 4 August 2014 in the office of the Centre for Society & Religion (CSR).

On 4 August 2014, a violent group of about 40 persons, including about eight people in Buddhist Monks' robes, forcibly stormed into the CSR building at around 2.30 pm during a meeting of the Families of the Disappeared with representatives of civil society organisations, Christian clergy, lawyers and diplomats. Human rights defender Britto Fernando was the main organiser of the meeting and Nimalka Fernando was one of the key participants.

At around 11am on 5 August 2014, police in the city of Maradana visited CSR office and asked the priest-in-charge to provide details of those who came from the North for the meeting held there the previous day. The same day, at approximately 10 am, officers from the Police Criminal Investigation Department also visited Britto Fernando's office. The following day, 6 August, police summoned and questioned Nimalka Fernando.

Several members of the Families of the Disappeared who participated in the meeting also complained about intimidating behaviour prior to the meeting via phone calls from unidentified persons and/or from callers claiming to be from the Criminal Investigation Division (CID).

The Ministry of External Affairs issued an official statement on 5 August 2014 and it appeared to blame the organisers of the meeting, participants and the diplomatic community for the incident. It stated that a certain section of the diplomatic corps appeared to lack objectivity.

Furthermore, some of the intruders, who called themselves 'the Association of Families of Missing People from the South,' made several defamatory allegations at a press conference on 5 August 2014 triggering a smear campaign against human rights defenders. They stated that Nimalka Fernando and Britto Fernando were amongst those who had compromised the sovereignty of the country, and that human rights defender Mr Ruki Fernando, who was also present at the meeting, had recently given protection to LTTE cadres. This was in reference to events of March 2014, when Ruki Fernando was arrested in Killnochchi and detained for three days. He was subsequently banned from speaking to international media and ordered to hand over his sim card and computer to police.

In March 2012, a state-affiliated media and government websites conducted a smear campaign against Nimalka Fernando and other human rights defenders, accusing them of treason, in connection with their advocacy work at the UN Human Rights Council. The Minister of Public Relations, Mr Meryn Silva, reportedly threatened human rights defenders with physical harm if they set foot back in Sri Lanka. He was reported to have said, “I will publicly break the limbs of people like Sunanda Deshapriya, Nimalka Fernando and Paikiasothy Saravanamuttu”.

On 21 March 2014, human rights defenders Mr Ruki Fernando and Fr Praveen Mahesan were banned from speaking to international media and ordered to give their sim cards and computers to police. Police told media personnel that this was because they were under investigation regarding an incident in Killinochi, the details of which cannot be made public.

Ruki Fernando and Fr Praveen Mahesan were arrested on 16 March 2014 and released on 19 March, after visiting the Killinochi region to investigate the detention of human rights defender Ms Balendran Jayakumari. Balendran Jayakumari was arrested, along with her 13-year-old daughter, on 13 March 2014. She remains in detention at a Boossa facility under the Prevention of Terrorism Act and is allegedly at high risk of torture. There are reports that the human rights defender was assaulted in front of her daughter at the time of her arrest. She has not been granted access to lawyers or family and her daughter has been taken into a children's welfare home. The Prevention of Terrorism Act facilitates the detention of suspects in police custody for 18 months without charge.

The government of Sri Lanka alleges that a Liberation Tigers of Tamil Eelan (LTTE) cadre, known as “Gobi”, was sheltering at Balendran Jayakumari's home and had been seeking to reform the LTTE. On the evening of her arrest, however, a police spokesperson had stated on BBC Tamil that she was under investigation in connection with a shooting incident in which a police officer had been injured that morning. The government further alleges that Ruki Fernando and Fr Praveen Mahesan had close ties to individuals the police wished to interrogate with regard to “Gobi”. In the past, it has been common for the Sri Lankan government to try to sully individual's reputations in this manner, and to use the idea of a cadre attempting to reform the LTTE to initiate a widespread crackdown on human rights defenders.

Balendran Jayakumari, who campaigns against enforced disappearances, is being detained under the Prevention of Terrorism Act after being arrested, along with her 13-year-old daughter, on 13 March 2014. Front Line Defenders issued an urgent appeal on her case on 14 March 2014.

On 16 March 2014, human rights defenders Mr Ruki Fernando and Rev. Praveen Mahesan were arrested and questioned by officers of the Terrorist Investigation Division (TID) in Killnochchi, in northern Sri Lanka. The police confirmed that they will be transferred to Colombo. It is unclear whether charges under the Prevention of Terrorism Act (PTA) have been formalised. Ruki Fernando is an adviser to INFORM, a human rights documentation centre in Colombo, and Rev. Praveen Mahesan of the Oblates of Mary Immaculate (OMI) is the director of the Centre for Peace and Reconciliation in Jaffna.

The two human rights defenders were arrested at approximately 10 pm on 16 March while visiting the Tharmapuram area of the Kilinochchi district to investigate the arrest, the previous day, of Ms Balendran Jayakumari, a human rights defender campaigning against enforced disappearances, and her 13-year-old daughter. The police initially denied detaining Ruki Fernando and Rev. Praveen Mahesan, but later confirmed that they had been arrested by a specially appointed unit of the TID. The office in charge of the Kilinochchi police further stated that they had been arrested as “they behaved in a suspicious manner” as they visited families of disappeared individuals.

It is reported that they were questioned separately at the Killnochchi police station and that they were transferred to Vavuniya at approximately 1.30 am on 17 March. In the morning of 17 March, Ruki Fernando’s parents were issued with a Notice of Arrest stating that he was arrested by the TID on alleged acts of terrorism and would be held for further investigation. It is not clear whether the family of Rev. Praveen Mahesan was issued such notice. At 1.30 pm, their lawyers received confirmation that the human rights defenders had been brought to the TID Headquarters in Colombo. A police spokesperson announced that they will be charged under the PTA, however it is unclear whether charges have been formalised.

The arrest of the two human rights defenders occurred while the United Nations Human Rights Council discusses a draft resolution on reconciliation, accountability, and human rights in Sri Lanka.