About Milton Sánchez Cubas
Status:
Innocent Verdict
About the situation

On 28 March 2017, the Supreme Court of the Supra Provincial of Cajamarca returned a verdict of innocent for 16 environmental leaders of Cajamarca.

On 29 October 2015, the trial against the 16 HRDs began, with the prosecutor seeking over 30 years imprisonment for each of the defendants. 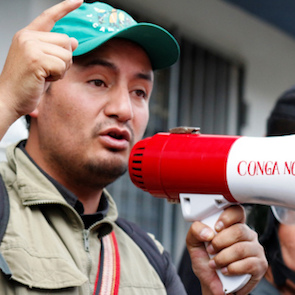 Milton Sánchez Cubas is a member of the collective Guardianas y Guardianes de la Laguna (Guardians of the Lagoon) which works to oppose the construction of a mining mega-project known as Conga which is planned for the Cajamarca region of Peru and which they believe could have a negative effect on the rights of those in the region.

The mine is to be constructed by the Minería Yanacocha company, which has been operating in the region for nineteen years. Inhabitants of the Cajamarca region allege that contamination from these existing operations have rendered their traditional occupation of dairy production unviable. They further allege that the operations have affected the health of the population, with the rate of stomach cancer now being one of the highest in the country. There have also been effects on the water supply of the local population. The human rights defenders of Guardians of the Lagoon have been assisting their community to speak out against and report these abuses.

The public prosecutor has recommended a prison sentence of between 30 and 35 years for each of the accused and reparation of ten thousand soles (approximately 2,800 euro). This case had previously been closed but has been re-opened by the public prosecutor.

This hearing has already been postponed four times. On 21 July 2015, it was postponed as the public prosecutor claimed he had not read the case file. The human rights defenders must make long journeys from the Celendin region to the city of Cajamarca. Many of them are subsistence farmers or parents of small children, and this males the journey very complicated. However, they could face imprisonment if they fail to turn up for these sessions, which are frequently postponed. The human rights defenders view the trial as an attempt to rob them of time and energy which could otherwise be devoted to their peaceful work in the defence of human rights.