About Marino Alvarado
Status:
Assaulted
About the situation

On 1 October 2015, at approximately 5:30 pm, human rights defender Mr Marino Alvarado, along with his nine-year-old son, was subjected to an aggravated robbery in his home.

The incident follows public declarations by the President, Nicolas Maduro, against the human rights defender made on television in August 2015. 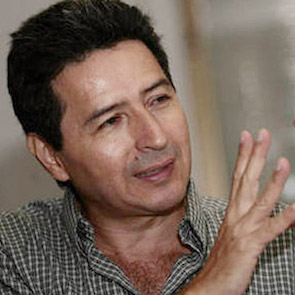 On 1 October 2015, at approximately 5:30 pm, human rights defender Mr Marino Alvarado, along with his nine-year-old son, was subjected to an aggravated robbery in his home.

The incident follows public declarations by the President, Nicolas Maduro, against the human rights defender made on television in August 2015.

On 1 October 2015, Marino Alvarado and his son were at their home in Caracas when three armed persons entered their home and tied them up for forty minutes. The assailants took with them two laptops, a tablet, two telephones, a camera and some money. Marino Alvarado received blows to the head which required medical attention afterwards. The human rights defender has made a formal complaint to authorities.

Marino Alvarado had submitted a request for protection measures from the Inter-American Commission for Human Rights before this event had taken place, owing to the constant harassment and intimidation to which he has been subjected by high-level officials of the Venezuelan state.

On 21 August 2015, Venezuelan President Nicolas Maduro appeared on national television and made hostile statements against Provea, in which he labelled them a right-wing political organisation that presents itself as a human rights organisation, and which is financed by the National Endowment for Democracy, an organisation funded by the US government.

In fact, Provea does not receive funding from this programme, nor does it carry out political work. The President also stated that he personally knows Marino Alvarado and that he is Colombian, at a time when anti-Colombian sentiment was high in the country. Provea has also indicated that Marino Alvarado has been subjected to false accusations linking him to Colombian paramilitarism, the illicit receipt of money and of conspiratorial and destabilising acts against the country.

The declarations by Mr Maduro came in the context of an evaluation by Provea of the new national security plan, which is known as Operativo de Liberación del Pueblo (Operation Free the People). Provea has highlighted the negative implications of this programme, which has been implemented by state security forces, mainly in poorer sections of society, and which has resulted in serious human rights violations.

In May 2015 Front Line Defenders issued an urgent appeal regarding the interception of communications between human rights defenders, including that of Marino Alvarado. Front Line Defenders also issued an urgent appeal regarding intimidation and threats against human rights defenders following their return to Venezuela after attending a session of the Inter-American Commission for Human Rights in March.

In his declarations, made on the programme Último Minuto broadcast on television channel Telesur, the President stated that Provea presented itself as a human rights organisation so that it could garner funding from programmes such as that of the National Endowment for Democracy (NED), and later pursue political ends with this funding. While Provea does receive funding from US-based philanthropic foundations, it does not receive funding from NED.The President also responded to what he claims is a campaign against him by Provea in which he was allegedly labelled anti-Colombian. He further commented that he would not be stopped by anyone.

The declarations by Mr Maduro come in the context of an evaluation by Provea of the new national security plan, which is known as Operativo de Liberación del Pueblo (Operation Free the People). Provea has pointed to the negative implications of this programme, which has been implemented by state security forces, mainly in poorer sections of society, and which has resulted in serious human rights violations such as arbitrary detentions, extra-judicial killings by police officers, illegal raids, mistreatment of detainees and a campaign of xenophobia against Colombians living in the country.

On 27 May 2015, representatives of Venezuelan human rights organisations Provea and Espacio Público filed a complaint with the Public Prosecutor denouncing the illegal interception of their communications by the Venezuelan government.

The complaint was filed by the Coordinator of Provea, Mr Rafael Uzcátegui, and Mr Carlos Correa, Director of Espacio Público, following statements made by Mr Diosdado Cabello, President of the Venezuelan National Assembly, on his national television programme. The statements, broadcast on 13 May 2015, recounted explicit details of trips planned by the organisations in April 2015 to meet other Latin American human rights organisations in Chile and Peru. Although information of travel itineraries and scheduled meetings with non-governmental organisations may have been publicly accessible, a planned meeting of representatives of Provea and Espacio Público with Mr Marino Alvarado, a member of the Venezuelan Observatory of Social Conflict who currently resides in Brazil, could only have been discovered through illegal surveillance. The organisations had only been in contact with Marino Alvarado electronically, indicating the monitoring of their online correspondences.

Provea and Espacio Público have been among many civil society organisations who have faced governmental harassment through state controlled means of communication, in particular Diosdado Cabello's weekly television show, 'Con el Mazo Dando'. The attempted criminalisation and discrediting of their work has been augmented by harassment of individual members of the organisations. On 22 March 2015, Rafael Uzcátegui was followed upon arrival at Simón Bolivar International Airport in Maiquetía.

The human rights organisations have based their complaint on Article 48 of the Venezuelan Constitution, which guarantees the inviolability of all forms of private communications, and prohibits its violation except by court order in due process of law.

On 17 December 2014, during his weekly television programme “Con el Mazo Dando”, transmitted on Venezolana de Televisión, president of the National Assembly and vicepresident of the Partido Socialista Unido de Venezuela (Psuv), Mr Diosdado Cabello, once again made defamatory comments against human rights defenders in the country. These comments were related to a recent meeting in the offices of Human Rights Watch in New York on 1 December 2014, in which many Venezuelan human rights defenders participated.

During the broadcast, a number of human rights defenders were named for having taken part in this meeting via video conference, including Mr Marcos Ponce from the Observatorio Venezolano de Conflictividad Social (Venezuelan Observatory for Social Unrest) Ms Rocío San Miguel, from Control Ciudadano para la Seguridad, la Defensa y la Fuerza Armada Nacional (Citizen Watchdog on Security, Defence and the Armed Forces) and Mr Carlos Nieto Palma from Una Ventana a La Libertad (A Window to Freedom). Diosdado Cabello also named Mr Marino Alvarado from the Programa Venezolano de Educacion y Proteccion de los derechos humanos – PROVEA (Venezuelan Programme for Education and Protection of Human Rights) and Mr Humberto Prado Sifontes, the general coordinator for the Observatorio Venezolano de Prisiones – OVP (Venezuelan Prison Observatory). However, neither of them had taken part in the meeting. A number of these human rights defenders have previously been the target of defamatory statements by Diosdado Cabello and other government representatives for their role in monitoring and denouncing human rights violations in the country.

During the section “Los mazazos” (The heavy blows) of the television broadcast, Diosdado Cabello made unfounded comments about how the human rights defenders had used this meeting to plan their strategies for 2015 and he suggests that they will resume the violent campaign that they were allegedly involved in during the first half of 2014, which left 43 people dead. In the meeting, which Diosdado Cabello described as being 'financed by imperialism', he alleged that the human rights defenders and NGOs were discussing their 2015 plan for 'destabilisation', including the resumption of the tactic of “Guarimba”, a form of protest which includes blocking roads, setting fire to tyres, and throwing rocks. He further criticised the NGOs involved for discussing the alleged violations of human rights in the country, the role of political parties, and the persecution of human rights defenders by the President of Venezuela Mr Nicolás Maduro.

Diosdado Cabello also commented that he had allegedly been informed by those participating in the meeting that Marcos Ponce had put himself in charge of organising the trade unionists from the Corporación Venezolana de Guayana, a decentralised state-owned conglomerate, located in the Guayana Region, to protest, instigate violence and to bring many of the essential industries in the country to a standstill. Marino Alvarado was also allegedly designated by the group to be an instigator of labour union protests in 2015. When mentioning Humberto Prado Sifontes, Diosdado Cabello suggested that he had not been asked to join the meeting due to a loss of confidence in him among fellow human rights defenders given his lack of accountability for $250,000 that he received and Diosdado Cabello mentioned hearing him described as a thug and a thief.

He also criticised the use of the organisation Transparencia Venezuela, the national branch of Transparency International which promotes transparency and accountability across all sectors of society, as a way of cleaning up the image of right-wing institutions. In his criticism of this organisation, he details how the director Ms María Freitas Sánchez has travelled to the US ten times this year and that she is responsible for the finances of the organisation, including money transfers from the US, and suggests that she is linked to a number of well known right-wing politicians in Venezuela. The defamatory comments made during this programme are believed to be part of a smear campaign against defenders and civil society organisation by the President of the National Assembly.

This is the latest in a series of defamatory remarks made by Diosdado Cabello on his programme. In a recent hearing of Venezuela before the UN Committee against Torture in Geneva, Diosdado Cabello's programme was mentioned as an example of criminalisation against human rights defenders.