About Marie Daunay
Status:
Lawsuit withdrawn
About the situation

On 17 March 2015, human rights defenders Ms Marie Daunay and Mr Wadih Al-Asmar will appear before the Court of Publications at the Baadba Palace of Justice on charges relating to “defamation and false accusation”. If convicted, they face the possibility of imprisonment and a fine. 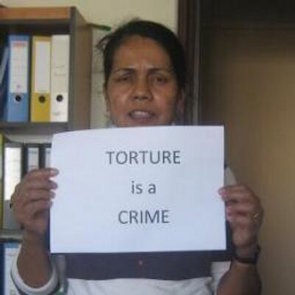 Marie Daunay is President of the Lebanese Center for Human Rights - CLDH, a local non-profit human rights organisation based in Beirut that monitors incidents of arbitrary detention, enforced disappearance, and torture.

The Observatory for the Protection of Human Rights Defenders (a joint programme of the World Organisation against Torture – OMCT and FIDH), the Euro-Mediterranean Human Rights Network, Front Line Defenders and ACAT strongly condemn the ongoing judicial harassment against representatives of the Lebanese Centre for Human Rights (CLDH) for denouncing acts of arbitrary detention and torture.

Our organisations denounce this attempt to instrumentalise the judiciary for political ends and call upon the Lebanese judiciary to drop all charges in the forthcoming trial session scheduled on June 11 when the presiding judge is supposed to rule on the case.

On June 11, 2015 Ms. Marie Daunay and Mr. Wadih Al-Asmar, respectively President and Secretary General of the Lebanese Centre for Human Rights (CLDH), will appear before the Publication Court for a second public session in an investigation commenced in March 2011. The two human rights defenders are accused of “defamation” and could face up to a one-year jail sentence and a fine. CLDH is a member organisation of EMHRN, working on arbitrary detention, torture and enforced disappearance.

The case is based on a complaint filed by the leader of the Amal Movement, a Lebanese party, and head of the Lebanese Parliament against CLDH, following the publication on February 10, 2011 of a report entitled “Arbitrary Detention and Torture: The Bitter Reality of Lebanon”, denouncing alleged torture practices perpetrated by Lebanese security services. In one paragraph, the report mentions testimonies of arrests by Amal Movement. During some of these investigations, some serious allegations of torture were made.

In the presence of NGOs and diplomats, including representatives of the European Union and the United Nations, the first public court session of the trial was held on March 17 at the Publication Court of Baabda presided by Judge Elias Khoury who said he would render his judgement on June 11.

Our organisations strongly condemn the ongoing judicial harassment against the representatives of CLDH aiming at sanctioning their work and fundamental role in denouncing human rights violations. We strongly urge the authorities to put an end to such practices and immediately and unconditionally drop all charges against them. The Lebanese authorities must also guarantee the physical and psychological integrity of Ms. Daunay and Mr. Al-Asmar and other CLDH staff, as well as that of all human rights defenders in Lebanon.

Finally, we call upon the Lebanese authorities to ensure full respect for human rights and fundamental freedoms in accordance with international human rights standards and international instruments ratified by Lebanon, as well as the Declaration on Human Rights Defenders, adopted by the UN General Assembly.

On 17 March 2015, human rights defenders Ms Marie Daunay and Mr Wadih Al-Asmar will appear before the Court of Publications at the Baadba Palace of Justice on charges relating to “defamation and false accusation”. If convicted, they face the possibility of imprisonment and a fine.

The charges arise from a complaint filed by the leader of Amal Movement – a Lebanese political party associated with Lebanon's Shia community – and head of the Lebanese Parliament against CLDH, following the publication of a report by the organisation on 10 February 2011 that denounced alleged practices of torture in Lebanon. The report, which is based on statistical data, testimonies and interviews, mentioned allegations of torture perpetrated by members of the Amal Movement. The case had been transferred to the Court of Publication on 24 February 2014 after the Investigating Judge at Baabda Court indicted the human rights defenders with defamation.

The indictment followed a series of hearings before the Investigating Judge, beginning in October 2011. The human rights defenders had originally been summoned to appear before the criminal investigation service at the Ministry of Justice in Beirut on 14 March 2011 and were interrogated a week later. Reportedly, in August 2011, unidentified individuals broke into CLDH premises and stole money, computer equipment and an official stamp of CLDH.