About José Onofre Esquivel Luna
Status:
At work
About the situation 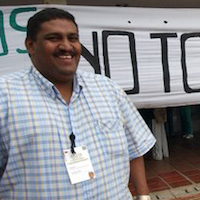 Jose Onofre Esquivel Luna is the Vice-president of Sindicato Nacional de Trabajadores de la Industria de Alimentos (Sinaltrainal) Seccional Bugalagrande (the Bulgalagrande Section of the National Union of Workers of the Food Industry) and an employee of the multinational company Nestlé SA. The human rights defender is committed to the defence of workers' rights in Colombia, and has been granted precautionary protection measures by the Inter-American Commission on Human Rights.

José Onofre Esquivel Luna was attacked as he was driving with his security guards along Colombia Street towards Avenue 64 in the van assigned to him as part of the protection scheme. One of the attackers was killed, another injured, and a third captured, but others escaped. Sinaltrainal had organised a National Meeting of Regional Managers of Work Teams relating to the defence of labour rights, but the event was cancelled for security reasons.

Trade unionists in Colombia face grave risks. In 2013, according to Central Unitaria de Trabajadores – CUT (the Central Trade Union), 28 trade unionists were killed, 14 others survived attacks, five have been disappeared, 185 received death threats, one was kidnapped, and 13 were arbitrarily detained and remain so. Most recently, on 10 June 2014, members of the national police shot a tear gas cannister at point blank range at the arm of Mr Francisco Mora, the National Treasurer of Sindicato Nacional de Trabajadores del Transporte – SNTT (National Trade Union of Transport Workers). On 9 June 2014, Mr Ivan Guerrero Sanchez, Vice-president of Union Sindical Obrera (USO) Subdirectiva Centro (Central Directive Board of the Workers' Trade Union) was the victim of an attempted killing as he travelled to his working place. On 15 May 2014, there was an attempt to kill Mr Alexander Castro Peñalosa of the USO. Furthermore, Front Line Defenders issued an urgent appeal on the attempted killing of human rights defender and trade union leader Mr Luis Plaza Velez in Cartagena, on 16 May 2014.