About Hussain Jawad
Status:
At work
About the situation

On 3 April, the court of appeal upheld a 3 years sentence of imprisonment against Hussain Jawad for insulting the Bahraini King in a speech he given in 2013. The human rights defender is currently out of Bahrain. 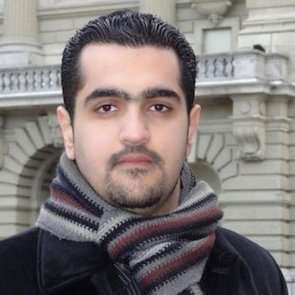 Hussain Jawad is Chairman of European-Bahraini Organisation for Human Rights (EBOHR), an international organisation that works to defend human rights across the Middle East. Hussain Jawad has publicly called for a peaceful struggle to demand democracy in Bahrain.

The human rights defender was charged of “collecting money from Bahrain and abroad without a permit.”

Hussain Jawad had spent three months in prison prior to his release on bail, pending trial, on 19 May 2015. He had been arrested on 16 February 2015 and detained at the Criminal Investigations Directorate. No reasons were provided for the arrest at the time. Hussain Jawad reported that during his detention he was prevented from sleeping and using the bathroom, confined to a narrow cell, and that he overheard other detainees endure “electric shocks”, which were used to inflict suffering on them. His lawyer later confirmed that he suffered physical, sexual, verbal, and psychological abuse while in detention and interrogation. During that time, the human rights defender confessed to “collecting money from Bahrain and abroad to aid and abet saboteurs”, a charge he now refutes. The EBOHR says Hussain Jawad was “tortured to elicit confessions on fabricated charges.”

Authorities previously arrested Hussain Jawad on 23 November 2013 while he was lodging a complaint regarding a defamation campaign against a number of human rights defenders in Bahrain. He was interrogated on charges relating to “inciting hatred against the regime”, on the basis of a speech he delivered during Ashura season in Manama. The human rights defender was detained for three months at Dry Dock Prison.

Bahraini authorities released human rights defender Hussain Jawad from Jaw Prison on Tuesday, 19 May 2015. Jawad spent over three months in prison on charges of “collecting money from [within] Bahrain and abroad to aid and abet saboteurs” - a charge he denies. He suffered psychical, psychological, and sexual abuse during his detention, and reports that he confessed to the charges following multiple days of abuse. After months in prison, authorities released Jawad on bail and adjourned his case until 26 May 2015.

Bahraini authorities first arrested Jawad in November 2013 following a speech he gave in Manama earlier that month, in which he had urged Bahrainis to continue their peaceful protests. He was charged with inciting hatred against the regime and insulting the monarchy. Jawad spent 90 days in detention following his arrest. He emerged in January 2014, bringing with him credible reports of the torture perpetrated inside Bahraini prisons.

Jawad returned to Bahrain in August 2014 and was rearrested during a night raid on his home just six months later. On 16 February 2015, masked police officers in plain clothes entered his home in Sitra village, bounded and forced him into a vehicle, and held him in incommunicado detention for ten hours. He later called his wife and told her he was detained in Bahrain's Criminal Investigations Directorate. Jawad’s lawyer has since confirmed he suffered physical, sexual, verbal, and psychological abuse while in detention.

In the morning of 16 February 2015, human rights defender Mr Hussain Jawad was arrested and detained at the Criminal Investigations Directorate. No reasons were provided for the arrest.

Hussain Jawad was arrested when security forces, including masked men in civilian clothes, arrived at his home in Sitra, in the Central Governorate of Bahrain in armoured vehicles, a civilian car, and a minibus. The security forces searched the human rights defender's house, and confiscated his passport and mobile phone. Hussain Jawad was held incommunicado for nearly ten hours before he was able to speak to his spouse by telephone. He has reportedly been ill-treated while in detention.

Hussain Jawad was previously arrested on 23 November 2013 and interrogated on charges relating to “inciting hatred against the regime” in light of a speech he delivered during Ashura season in Manama. He was released on bail on 9 January 2014 and the next hearing in the trial against him is scheduled for 25 February 2015. More information on his case could be found on the Front Line Defenders' website.

On 22 November 2013, a number of prominent Bahraini activists were accused in the press of, inter alia, arming opposition militant factions, inciting xenophobic violence, and propagating sectarian discrimination. The state press has engaged in this defamatory media campaign in an attempt to denigrate Bahraini human rights defenders, and EBOHR has accused other organisations of this tactic; namely, Bahrain Human Rights Watch Society, Karama Human Rights Society, and The European-Gulf Centre of Human Rights.

On 23 November 2013, Hussain Jawad went to the Central Province Centre to file a complaint against these media organisations and the Chief Editor of Gulf News, Mr Anwar Abdul Rahman. The Gulf News newspaper has published pictures of human rights defenders as part of this smear campaign.

While at the Central Province Centre, Hussain Jawad was notified that a police patrol was on its way from Naeem Police Station to arrest him. Two police officers in civilian clothing arrived and attempted to handcuff Hussain Jawad. Initially, Hussain Jawad refused to be handcuffed, but after some discussion, he agreed and was escorted to Naeem Police Station to be questioned in the presence of his lawyer, Mr Saeed Sarhan. The interrogation related to charges of “inciting hatred against the regime” in light of a speech he delivered during Ashura season in Manama. Hussain Jawad was later transferred to Hoora Police Station, where he remained in detention overnight.