About Nasser Nawaj'ah
Status:
Assaulted
About the situation 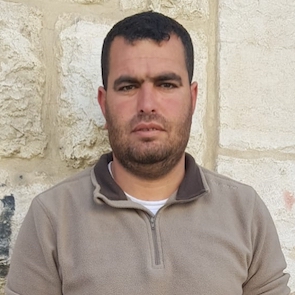 Nasser Nawaj'ah is a Palestinian human rights defender and a field researcher at the Israeli Information Centre for Human Rights in the Occupied Territories, known as B’Tselem.

Nasser Nawaj'ah is a Palestinian human rights defender and a field researcher at the Israeli Information Centre for Human Rights in the Occupied Territories, known as B’Tselem.

On the morning of 12 January 2019, a Palestinian farmer rang Nasser Nawaj'ah to ask him to accompany him while he ploughed his land in Khirbet Umm al-’Amed, north of a-Samu’ and close to the settlement of Otniel. The farmer specifically asked the human rights defender to come to document any possible attacks by settlers.

Around midday, Nasser Nawaj'ah’s attention was drawn to an individual, who appeared to be a settler, approaching from the settlement of Otniel. The man had three dogs on leashes. As he approached, the man took the muzzle off one of the dogs. Guy Batavia and Nasser Nawaj'ah began to film the man as he approached. When the man was just a few metres away, he shouted “Don’t take pictures of me!” in Hebrew before grabbing Guy Batavia’s bag and hitting him with it. He threatened to break Nasser Nawaj'ah’s camera if he didn’t stop filming.

Two of the man’s dogs then attacked Nasser Nawaj'ah. One of the dogs bit him on his right hand, which began to bleed. The other dog bit him on his left leg. The settler then called out to the dogs and left the scene. Guy Batavia called the police, who arrived an hour later. The two policemen told Nasser Nawaj'ah to go to the hospital to get treatment before submiting a complaint to the police station.

Front Line Defenders is concerned for the safety of Nasser Nawaj'ah and other human rights defenders who seek, receive, and impact information relating to human rights violations in and around illegal Israeli settlements.