About Lidia Gómez
Status:
Assassination attempt
About the situation

Between 21 November 2018 and 7 December 2018, six indigenous and campesino human rights defenders were killed in Colombia. On 8 December 2018, the Awá leader and woman human rights defender Lidia Gómez suffered an assassination attempt. All of these defenders were working to protect their economic, social and cultural rights in the regions of Cauca, Nariño and Norte de Santander. 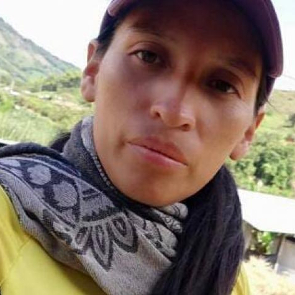 Lidia Gómez is the current leader of the Awá indigenous people’s Alto Cartagena reserve. As one of the leaders of the Cawamari indigenous organisation, she defends the human rights of indigenous communities in the region that are being violated by the actions of guerrilla and paramilitary groups that seek to control the territory.

Between 21 November 2018 and 7 December 2018, six indigenous and campesino human rights defenders were killed in Colombia. On 8 December 2018, the Awá leader and woman human rights defender Lidia Gómez suffered an assassination attempt. All of these defenders were working to protect their economic, social and cultural rights in the regions of Cauca, Nariño and Norte de Santander.

Around 1 a.m. on 8 December 2018, a number of unknown armed individuals fired shots at the house of Lidia Gómez, in the municipality of Ricaurte, Nariño. Even though five bullets entered the house, the defender and her husband were not harmed.

The regional office of the Ombudsman in Cauca opened an investigation; nonetheless, there has been no response from specialised protection organs such as the National Protection Unit (Unidad Nacional de Protección, UNP), whose mandate include the protection of human rights defenders and social leaders at risk.

The attack against Lidia Gómez took place six days after the assassination of the Awá indigenous leaders and human rights defenders Héctor Ramiro García and his son Braulio Arturo García, in the indigenous reserve Palmar de Imbí, Ricaurte, Nariño, on 2 December 2018. On 4 December 2018, Lidia Gómez had publicly requested special protection guarantees for her people, due to the high level of violence that they have been facing. Héctor Ramiro García was the founder of the Camawari indigenous organisation, and his son Braulio Arturo García had recently been chosen as a leader to his people.

On 1 December 2018, human rights defender and indigenous authority Aldemar Trochez was found dead near Caloto, Cauca, less than 100 meters from a military checkpoint, with a gunshot wound in the head. Days before, a threatening pamphlet was circulated in the region. It was targeted at the indigenous authorities in Cauca, who were accused of “working with the public forces”.

Furthermore, on 7 December 2018, the indigenous authority Edwin Dagua Ipia, who worked with youth leadership in the region of Caloto, Cauca, was also killed. He had previously received a series of threats against him, which prompted a request for protection to the Colombian government in July. The Ministry of Interior condemned the murder of Edwin Dagua Ipia, and initiated a coordination with the local indigenous authorities for the deployment of a judicial commission to the region.

The killings of José Antonio Navas and Alba Edilma Cuevas were reported in the End of Mission Statement of the United Nations Special Rapporteur on the situation of human rights defenders on his visit to Colombia.

All these defenders were indigenous or campesino human rights defenders, and nearly all of them were attacked in their homes, by unidentified armed persons. These recent trends demonstrate the existence of a pattern of killings that has not been properly addressed by the authorities so far.

Human rights defenders working in Colombia have been increasingly targeted since the signing of the Peace Accords, with alarming numbers of assassinations and attacks perpetrated especially against those who work on indigenous and campesino rights. This presents a major risk to defenders living in remote areas, who are often more vulnerable to attacks, and, in the absence of appropriate state protection, are left to operate in an extremely hostile environment.

1. Immediately take all necessary measures to guarantee the physical and psychological integrity and security woman human rights defender Lidia Gómez and of the members of the Awá indigenous group, in coordination with them;

2. Carry out an immediate, thorough and impartial investigation into the recent killings, with a view to bringing the perpetrators to justice in accordance with international standards.