About Nicholas Opiyo
Status:
Released on Bail, Charged
About the situation

On 30 December, after spending over a week in detention, where he was at risk of contracting COVID-19, Ugandan lawyer and human rights defender Nicholas Opiyo was granted bail by the Buganda Road Court, after serious moneylaundering and corruption charges were filed against him.

On 22 December 2020, Advocate Nicholas Opiyo, a Ugandan lawyer and human rights defender, and four colleagues were arrested and detained on allegations of “money laundering and related malicious acts”. 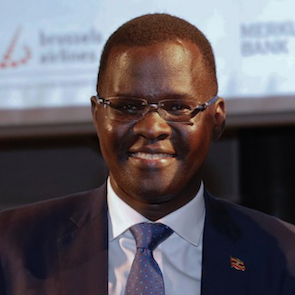 Nicholas Opiyo is a leading human rights lawyer and founder of Chapter Four Uganda, an organization that provides research, advocacy, and outreach services to influence laws, policies, and practices in the interest of civil liberties and human rights.

On 30 December, after spending over a week in detention, where he was at risk of contracting COVID-19, Ugandan lawyer and human rights defender Nicholas Opiyo was granted bail by the Buganda Road Court, after serious moneylaundering and corruption charges were filed against him. Nicholas Opiyo and his colleagues have denied all charges, asserting that they have been fabricated and have argued that the arrests, detention and charges are pre-election maneuvers targeting civil society in Uganda.

Following the arrests on 22 December, the Chapter Four Foundation, headed by Nicholas Opiyo, released a statement on the arrest and detetnion of the five human rights defenders. Chapter Four continues to release statements, offering analysis and information related to developments in the case.

On 22 December 2020, Advocate Nicholas Opiyo, a Ugandan lawyer and human rights defender, and four colleagues were arrested and detained on allegations of “money laundering and related malicious acts”.

The five are members of the Ugandan organisation Chapter Four, which supports human rights and pro-democracy activists in their efforts to promote open government, defend human rights, strengthen civil society and facilitate the free flow of information and ideas.

Nicholas Opiyo, Executive Director of Chapter Four, along with three human rights lawyers, Dakasi Herbert, Odur Anthony and Esomu Obure, and Tenywa Hamid a Human Rights Officer at Chapter Four were taken from Kamwokya Suburb while having lunch at Lamaro Restaurant by suspected  law enforcement officers dressed in plain clothes on December 22, 2020. They were handcuffed before being speedily driven off in an unmarked van with tinted windows. Since their arrest, they have been detained with no access to their lawyers, family members or colleagues. The manner in which they were arrested was tantamount to an abduction, and combined with their ongoing incommunicado detention, is a violation of recognized due process rights under national, regional and international law.

The Uganda Police Force has since confirmed that Mr. Opiyo was arrested by a Joint Task Team of Security and Financial Intelligence Authority, on allegations of “money laundering and related malicious acts.”

Front Line Defenders is seriously concerned by the arrest of Nicholas Opiyo and the charges brought against them. It believes that they has been targeted solely for their peaceful and legitimate human rights activities and exercising the right to freedom of expression.

The arrests of Mr. Opiyo and his colleagues come at a time when there have been increased concerns in the run-up to presidential elections in Uganda scheduled for January, as there have been increased restrictions on civic space. This has included arbitrary arrests, excessive use of force and restrictions on the exercise of freedom of peaceful assembly, association and expression. Most recently, the Financial Intelligence Authority ordered the freezing of bank accounts held by several non-government organisations, accusing them of financing terrorism. These acts amount to intimidation and delegitimisation of non-governmental organizations, particularly those working on human rights and promoting good governance and fair election practises.

Front Line Defenders expresses concern regarding the increase in repression of human rights defenders in Uganda in advance of the country’s imminent elections and the crackdown on peaceful assemblies, including arbitrary arrests and detentions, and alleged killings. Front Line Defenders condemns the ongoing human rights violations, and recognises them as part of an effort to clamp down on dissenting voices, specifically against human rights defenders critical of the government and who are calling for free and fair elections.