About Aleksandr Savelyev
Status:
Case closed
About the situation

On 27 April 2018, Prikubansky District Court closed the case against Alexander Savelyev. The human rights defender had been charged with violating “the honor, dignity and reputation” of a civil servant. 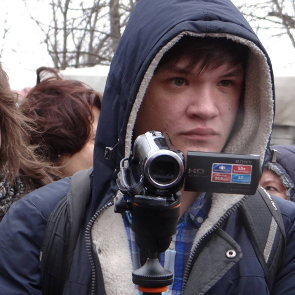 Aleksandr Savelyev is a member of Environmental Watch on North Caucasus (EWNC), which campaigns for the preservation of the environment and wildlife in the North Caucasus. The organization had been looking into suspected corruption surrounding Isa Chinhariev’s activities in his role as a civil servant of Krasnodar city’s administration.

On 27 April 2018, Prikubansky District Court closed the case against Alexander Savelyev. The human rights defender had been charged with violating “the honor, dignity and reputation” of a civil servant in the Krasnodar City administration under Article 152 of the Civil Code of the Russian Federation. The charges had been pressed by Isa Chingariev, the Krasnodar City civil servant in question.

The judge agreed to close the case in exchange for Alexander Savelyev’s removal of Environmental Watch on North Caucasus (EWNC)'s two videos that the human rights defender had posted on EWNC’s YouTube blog. The videos referred to a letter from the Prosecutor’s Office, which acknowledged suspicion surrounding the legality of Isa Chingariev’s activities.

On the 16 April 2018 the first hearing on a lawsuit against Alexander Saveliev, was held at Prikubansky District Court in the city of Krasnodar. The human rights defender is accused of violating “the protection of honor, dignity and business reputation” under Article 152 of the Civil Code of the Russian Federation. The lawsuit was filed by Isa Chingariev, the Head of the Landscape Design Department for the city of Krasnodar.

On 4 September 2017 EWNC had sent official letters to the Prosecutor's Office of Krasnodar and other law enforcement bodies appealing to them to investigate the activities of Isa Chingariev and his ex-wife, Nadezhda Chingariev. From 2009 to 2015, Nadezhda Chingariev’s company “Nadezhda-2001” reportedly received tenders to the value of more than 280 million rubles (approximately € 3.6 million) for landscaping work. Isa Chingariev and his department were responsible for overseeing this work.

EWNC’s request for an investigation was unsuccessful but it came to light by means of letters exchanged between EWNC and the Prosecutor’s Office, that a criminal corruption case had been opened regarding Isa Chingariev’s activities in 2014. Isa Chingariev had been charged under Article 289 of the Criminal Code of the Russian Federation, but the Prosecutor’s Office claims that the case had been closed once it expired.

Federal Law on the Civil Service of the Russian Federation states that, "The civil servant is to be dismissed in connection with the loss of confidence in the event that civil servants fail to take measures to prevent and (or) resolve the conflict of interests to which he is a party". But Isa Chingariev has faced no perceptible disciplinary action, despite the evident conflict of interest in his line of work.

On 16 April 2018 Alexander Saveliev was charged under Article 152 of the Civil Code of the Russian Federation for violating “the protection of honor, dignity and business reputation”. The charge was specifically in relation to two EWNC videos, created by Alexander Savelyev, that referred to the letter from the Prosecutor’s Office, which acknowledged suspicion surrounding the legality of Isa Chingariev’s activities. The videos had been posted on the EWNC’s YouTube channel, Green Blog.

On 11 December 2017 a court had issued a ruling, at the request of The Department of the Federal Service for the Supervision of Communications, Information Technology and Mass Communications (Roskomnadzor), ordering that these videos be blocked.

On 28 December 2017 three EWNC members, including Aleksandr Savelyev, were violently attacked by three masked men. The attack is believed to have been in retaliation for the organisation's activities.

In September 2016, the Ministry of Justice of the Russian Federation stated that EWNC’s activities were “political” and declared the organization to be a “foreign agent”.

Front Line Defenders is deeply concerned about the lawsuit against Alexandr Savelyev, which it believes is an act of retaliation for investigating and campaigning against corruption within the civil service of Krasnodar city.

Front Line Defenders urges the authorities in Krasnodar and the Russian Federation to:

1. Immediately drop all charges against Alexandr Savelyev as Front Line Defenders believes that the human rights defender is being targeted solely because of his peaceful and legitimate work in the protection and promotion of environmental rights in Krasnodar;

2. Cease all further harassment and targeting of Alexandr Savelyev;

3. Guarantee in all circumstances that all human rights defenders in Krasnodar are able to carry out their legitimate human rights activities without fear of reprisals and free of all restrictions.