“We have the roots going right out of our feet. We belong here”

The Standing Rock Sioux tribe's battle for their land has become an international phenomenon. Native Americans and environmental defenders from all over the world have converged on the Dakotas to peacefully protest a massive pipeline project that threatens the lives of indigenous peoples.

“I keep asking: why would they do this?” human rights defender Ladonna Bravebull Allard told Front Line Defenders. She quickly added that the answer is clear:

“They want to wipe our footprints off the earth. They are trying to say we don’t exist. We are indigenous people to this land. We have the roots going right out of our feet. We belong here”.

Since April 2016, the Standing Rock Sioux tribe - together with other Native Americans and environmental defenders from all over the world - have been protesting against the Dakota Access Pipeline process, peacefully demanding protection of their rights to their land, resources and historic cultural sites.

A Texas-based company, Energy Transfer Partners, is building the pipeline in a territory which is considered sacred by the local population. Construction works risk damaging sites where the Sioux tribe’s ancestors are buried, and where their spirits are believed to be living. The pipeline, according to HRDs from the Standing Rock Sioux Tribe, is a blatant violation of the Treaty of 1868, which granted land ownership to the local indigenous populations.

Furthermore, local and international activists are worried about the environmental impact of the project. If there was a leak, the pipeline would pollute the Missouri river. The damage would be irreparable.

The $ 3.7 billion pipeline is set to run for 1,885 km, across four American states. In September 2016, the US government temporarily halted the construction works within 20 miles of the Lake Oahe – a reservoir that is part of the Missouri River - while waiting for further environmental assessments, required by the Army Corps of Engineers. On 14 November 2016, the Army Corps of Engineers determined that further analysis is needed before, or if, construction can resume in teh Lake Oahe area. 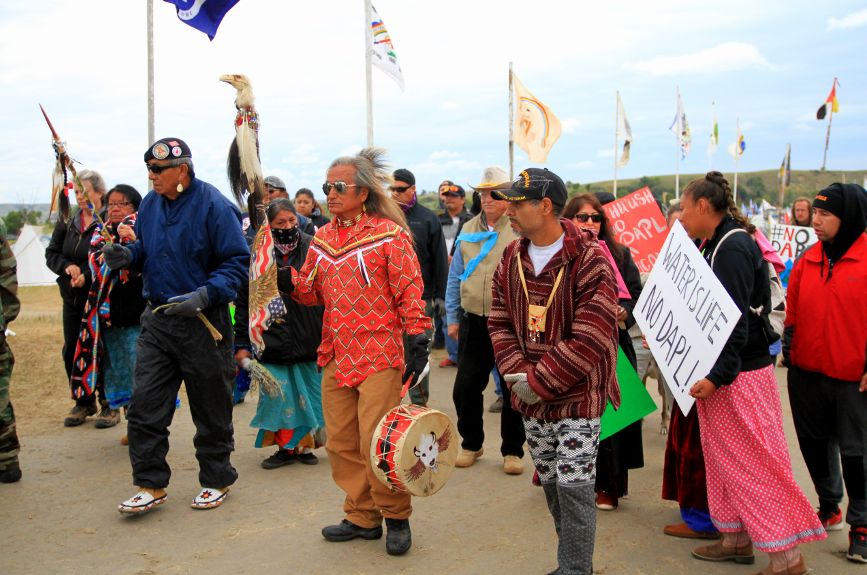 Thousands of human rights defenders and supporters, from all over the world, have travelled to North Dakota to show their solidarity. Police has often tried to brutally repress the peaceful protests, but defenders have resisted. According to Ladonna, it is thanks to international solidarity that the Sioux tribe will manage to stop the construction of the pipeline.

“I am hoping that this mindset spreads to the whole world”, says Ladonna. “So that everybody stands up to protect the water, so we can live. Because if we continue to kill the water, we will all die. And most importantly, the Mother Earth would die. And we can’t allow that. We must be able to live. There’s still genocide happening in America, and it’s us. We are expendable people, until we stand up. And now we stand up. You put our backs against the wall, we put one foot in front of the other and we face the storm like our brothers, the Buffalos. We face the storm. We are not backing down ever again".

"When I was young a man told me: the only reason why we live is that..we went through genocide, they tried to poison us, give us diseases, took our children away, did all of these things to us, and we are still here. We must protect the earth. We must live to save the world".