“It is a coup, done by the security committee which is NISS, the army, RSF and police. They have suspended the constitution, which means suspending the bill of rights, declared a state of emergency and a curfew. They are going to meet the angry protesters with brutality.”
- Human rights defender, Khartoum 11th April 2018

Celebrations of the fall of President and indicted war criminal Omar al-Bashir were loud and enthusiastic, but will not last for very long. The Sudan Professionals Association, which has coordinated the popular protests which came to a head this week, have stated that: “We do not accept the government by the army for the next two years … The regime remains the same. Just five or six people have been replaced by another five or six people from within the regime. This is a challenge to our people.”

General Ahmed Awad Ibn Auf who has proclaimed himself leader of a transitional military council was implicated in crimes in Darfur and has been Minister of Defence since 2015. He was a trusted ally of Bashir and was named First Vice-President in February. The declaration of a curfew is an immediate challenge to the protesters.

Dramatic footage from Sudan in the last days had shown a group of Sudanese soldiers firing on the country’s own National Intelligence and Security Service (NISS). The soldiers appeared to be protecting the thousands of protesters gathered around the Military HQ in Khartoum. The development of splits within the army was probably a key factor in a military coup that was launched on the morning of 11th April. The number and the courage of the protesters, many of them women, had also demonstrated that the status quo could not prevail.

When I was in Khartoum in February, we saw the somewhat surreal sight of soldiers guarding empty petrol stations. As we drove around we also saw queues to withdraw cash. There were armed groups every few blocks with four or five pick-up trucks which had bigger guns mounted on the back. We learned to identify which of these groups were police, which were NISS security agents, and which were the ruling party controlled militias. We also saw an encampment next to the Nile of the Rapid Support Forces, the now formalised militia which grew out of the Janjaweed responsible for ethnic cleansing in Darfur. They have fought for the Saudis in Yemen and are reportedly now partly funded by the EU to “stop migration.” They had been brought to the capital, but did not seem to be deployed against protesters.

The young human rights defenders engaged in the protests told us that it was better to be detained by the police. They “just” beat you and would probably release you within 24 hours. Those detained by NISS would be tortured and possibly detained for longer, but families would be allowed to bring food or medicine after a few days. Those detained by the militia are "disappeared" into what seems to be a revival of the notorious “ghost houses,” unacknowledged detention centres where detainees are routinely tortured.

The protests calling for the fall of the Bashir regime started in December and were driven by rising costs of food and fuel. At least 60 protesters have been killed (1). The corruption and incompetence of the regime coupled with the loss of international benefactors has brought the crisis. The government cannot print banknotes fast enough, but the inevitable inflation makes the cost of the government subsidies to the import of food and fuel unsustainable. Bashir came to power in 1989 in a military coup in cooperation with the National Islamic Front, but their political project has long since lost all credibility, and the government existed since then to maintain their access to plunder and to protect their leaders from accountability for their crimes.

Bashir declared a national emergency and martial law at the end of February. However, protests continued under the coordination of the Sudan Professionals Association (SPA), and, to mark the anniversary of the popular uprising that toppled a previous dictator on 6 April 1985, huge crowds took to the streets and marched on the Military HQ where they have been camped for the last four nights in spite of attacks by the NISS using tear gas and live rounds.

The reports in the last few days suggest that some elements of the military have been active in defending the protesters near the military HQ. The Sudanese Doctors Syndicate stated that 22 civilian protesters and 4 soldiers were killed in clashes since 6th April. Although there have been some reports of the involvement of the RSF, others are saying they have not yet been active. Reports from Khartoum indicate that there are now two militias active, the Difa' al-Sha'bi (Popular Defence) and a new militia formed by part of the Muslim Brothers in the last days called the Militia Sha'biya, (Popular Militia).

Apart from a statement by the EU (2) and a similar statement from the so-called Troika of the UK, US and Norway, there have been no serious efforts by the UN or others to engage with the Sudanese Government to prevent violence and find a way to manage a peaceful transition to a civilian led government as demanded by human rights defenders in the country (3). 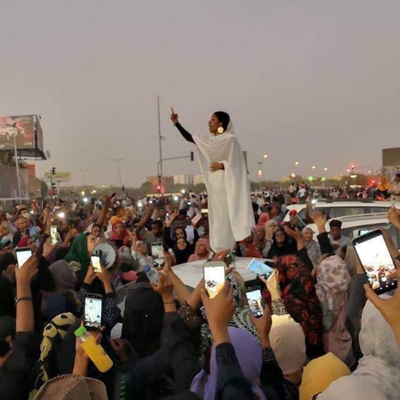 And yet if protesters in Sudan cannot look to the outside world for help, or even much solidarity, their continued determination to struggle for peaceful change in the face of tear gas and bullets does hold out hope for a better future for Sudan. The reported arrest of Bashir may have been a false dawn, but the iconic image of Alaa Salah leading protest chants from on top of a car is symbolic of the energy and commitment of young Sudanese women and men to bring about real change.