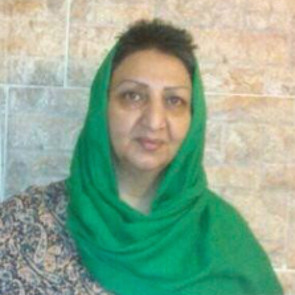 Iranian authorities are refusing to release human rights defender, Shahnaz Akmali, after  informing her on 27 January 2017 that she could be released on bail of USD 25,000. Her family members arrived to pay her bail on 29 January 2017 but they were told that there was no judicial order for her release and that she will be kept in prison. The human rights defender was arrested on 25 January 2017 and is currently being held in Ward 209 of Evin prison – a solitary confinement ward run by Iran’s Ministry of Intelligence.

Shahnaz Akmali is the mother of well-known Moustafa Karimbeigi, a 26-year-old peaceful street protester and member of the Green Movement. He was shot and killed by Iranian authorities in 2009 during the Ashura uprising,the result of widespread protests against Iran’s presidential election results that year. Since her son’s death, the human rights defender has made numerous attempts to seek redress for her son in Iran’s courts, resulting in repeated threats by the Iranian government against her and her family. She also joined the mothers of other victims of political violence to demand justice for their children. Shahnaz Akmali is likewise known for advocating for the rights of political prisoners held in Iran’s Evin prison by shaving her head in solidarity with the prisoners.

Shahnaz Akmali was arrested from her workplace and then taken to her home on 25 January 2017 by agents of the Intelligence Ministry in Tehran. No charges have yet been brought against her. Some of her belongings were confiscated. She was initially taken to an unknown location, and is now being held in Ward 209 in Evin prison. Although Ward 209 is inside Evin, it operates outside the prison’s jurisdiction as it is in the complete control of the Ministry of Intelligence. On 28 January 2017, it was reported in Iranian news that Shahnaz Akmali was taken to hospital and remained there for a few hours. Her family doubts the validity of the report and believes that the Iranian authorities have been providing them with misleading information regarding her arrest in order to cause them to worry about the human rights defender.

I am deeply concerned by, and strongly condemn, the detention of Shahnaz Akmali, which I believe to be in retaliation to her legitimate and peaceful human rights activities.

I urge the authorities in the Islamic Republic of Iran to:

1. Immediately and unconditionally release Shahnaz Akmali as Front Line Defenders believes that she has been targeted solely as a result of her legitimate human rights work;

2. Ensure that the treatment of Shahnaz Akmali, while in detention, adheres to the conditions set out in the ‘Body of Principles for the Protection of All Persons under Any Form of Detention or Imprisonment', adopted by UN General Assembly resolution 43/173 of 9 December 1988;

3. Cease targeting human rights defenders in Iran and guarantee in all circumstances that they are able to carry out their legitimate human rights activities without fear of reprisals and free of all restrictions including judicial harassment.