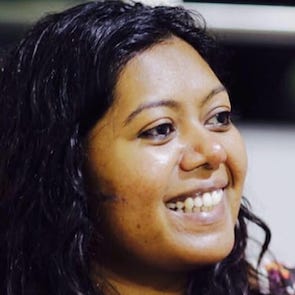 On 28 December 2017, Maldivian human rights defender Shahindha Ismail was targeted by an online news article published by Vagathu Online that labeled her as an apostate. The defender has since become the target of a police investigation, and has been subjected to death threats and online intimidation.

Shahindha Ismail is the founder and current Executive Director of the Maldivian Democracy Network (MDN), the first and longest running NGO in the country, focused on human rights and democracy. Shahindha is also one of the few advocates against religious fundamentalism in the Maldives and advocates in favor of deradicalisation.

On 21 December 2017, Shahindha Ismail tweeted in response to a speech by President Yameen Abdul Gayoom, in which he emphasized that Islam is to be the only religion in the Maldives and that there is no room for any other religion. Shahinda’s tweet said, “Religions other than Islam exist in the world because Allah has made it possible. No other religion would exist if not, is it not?”

On 28 December 2017, multiple news articles were published on news website Vaguthu Online, which accused Shahindha of advocating for other religions in the Maldives and branded her an apostate. In the Maldives, these crimes carry serious legal penalties, with the death penalty applying in some cases.

On the same day following publication of these articles, the Ministry of Islamic Affairs issued a statement urging the citizens of the Maldives to refrain from making statements in support of any religion other than Islam. The police then launched an investigation against Shahindha Ismail. Shahindha is being investigated under the Religious Unity Act, which criminalizes actions that may lead to religious conflict in the Maldives and carries a prison sentence of up to five years. Islam is the official state religion of the Maldives, and the constitution guarantees freedom of expression provided it is exercised in a manner “not contrary to any tenet of Islam.”

The online articles by Vaguthu Online and the statement released by the Ministry of Islamic Affairs have prompted a stream of death threats and online intimidation against Shahindha Ismail, with Twitter and Facebook posts calling for violence against her. The journalist who wrote the articles has also published derogatory tweets against the human rights defender. Shahindha Ismail believes that the intensity of the online threats is a result of the targeted and false news articles published by Vaguthu Online which have the explicit intention to incite violence against her. The police has not investigated these threats despite the defender’s attempts to alert the authorities.

Since President Abdulla Yameen Gayyoom was elected in 2013, the number of restrictions that hinder civil liberties in the country have increased. Human rights defenders that advocate for freedom of religion as well as rights within religion are particularly vulnerable, whilst journalists and freedom of expression activists are impeded by both official restrictions and threats to their person. On 23 April 2017, the human rights defender and blogger Yameen Rasheed was stabbed to death after the police failed to address death threats he had received.

I strongly condemn the police investigation against human rights defender Shahindha Ismail, and the articles and threats against her, which it believes are solely motivated by her peaceful and legitimate work for human rights in the Maldives, and calls on the Maldivian authorities to close the investigation.

I urge the authorities in the Maldives to:

1. Carry out an immediate, thorough and impartial investigation into the death threats and online harassment against Shahindha Ismail, with a view to publishing the results and bringing those responsible to justice in accordance with international standards;

2. Take all the necessary measures to guarantee the physical and psychological integrity of Shahinda Ismail;

3. Take measures to ensure that government officials or other public figures refrain from making statements or declarations stigmatising the legitimate work of human rights defenders;

4.  Guarantee in all circumstances that all human rights defenders in the Maldives are able to carry out their legitimate human rights activities without fear of reprisals and free of all restrictions.