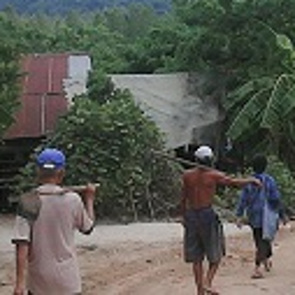 On 17 October 2016, human rights defenders Mr Sarayuth Ritthipin and Mr Chadet Kaewsin received a summons from the Chum Phae Police Station in Khon Kaen city, Isan region. They have been accused of libel and computer-related violations against government authorities.

Sarayuth Ritthipin a land rights defender and a news reporter of E-san Land Reform News Agency. This news agency actively reports on the human rights campaigns of landless communities in Isan, Northeastern Thailand. The Isan community has been affected by continued land redistribution and relocation programs since 1963. The Forest Protection policy which was announced in 2014 by the junta  government on the reclamation and restoration of protected areas nationwide has led to roughly 1800 families in Isan being accused of land encroachment. The junta government continues to intimidate, arrest, and forcibly evict people in Isan. Chadet Kaewsin a land rights defender and para legal who helps villagers of landless communities in Isan to gain access to legal services in order to defend their land rights.

On 17 October 2016, Sarayuth Ritthipin and Chadet Kaewsin received a summons from the Chum Phae Police Station in Khon Kaen. The summons regards a complaint that the 2nd Infantry Division, of the 8th Infantry Regiment filed against both human rights defenders on 3 October 2016. The complaint was lodged for two allegations. The first is for a libel offence and, the second is for ‘bringing into a computer system false or forged information, partly or as a whole’, under Thailand’s vague Computer Crimes Act. The human rights defenders will report themselves to the Deputy Superintendent of the Chum Phae Police Station on 25 October 2016 at 13.00.

On 4 and 5 August 2016, eight military officials of the 2nd Infantry Division, 8th Infantry Regiment, the Assistant to the District Chief Officer of Phu Pha Man and several police officers from the Chum Phae Police Station visited Chadet Kaewsin’s home in Ban Sam Phak Nam village in Khon Kaen. Chadet Kaewsin was not at home when the military and police officials came to visit. The officials asked to enter the house, but the human rights defender’s mother did not give them permission. The officials took multiple photos of Chadet Kaewsin’s house. The human rights defenders posted a news article about this visit on the E-san Land Reform News Agency website, titled “Military raided home asking to meet Phu Pha Man land activists”.

I am concerned by the judicial harassment of human rights defenders Sarayuth Ritthipin and Chadet Kaewsin, which I believe to be directly linked to their peaceful and legitimate work in defence of human rights.

1. Immediately withdraw the legal action against Sarayuth Ritthipin and Chadet Kaewsin as it is believed that it is solely motivated by their legitimate and peaceful work in defence of human rights;