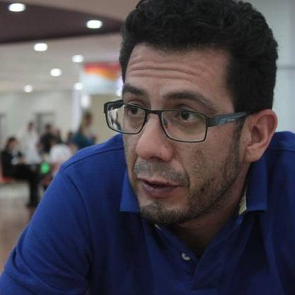 On 18 May 2016, police officials repeatedly fired pellet shots at human rights defender Mr Rigoberto Lobo Puentes as he monitored a protest taking place in the neighbouring area of Plaza El Llano, in the city of Mérida.

Rigoberto Lobo Puentes is a member of Observatorio de Derechos Humanos de la Universidad de Los Andes – ODHULA (Observatory of Human Rights of the University of Los Andes), where he specialises in monitoring demonstrations and accompanying victims of human rights violations through the judicial process. Rigoberto Lobo is also an educator and is regularly involved in teaching workshops and lectures to civil society on various issues related to using lawful and peaceful means to denounce human rights violations. Since 2014 he has faced constant police harassment, intimidation, and anonymous threats against himself and his family members due to his work as a human rights defender.

Although Rigoberto Lobo did not sustain serious injuries to his person or his property, this is not the first instance in which he has been harassed, threatened, intimidated and attacked by law enforcement officials as a direct result of his work, peacefully upholding human rights in Venezuela. The human rights defender has been targeted since 2014, and incidents of attacks and intimidation have included threats to destroy his vehicle, the questioning of friends, death threats and surveillance both by anonymous sources and members of the Mérida and National police. In 2015, the human rights defender was held for one hour while at the airport by the National Guard, on the alleged pretext he had refused a search. He was then forced to read an article of the Constitution several times.

In February 2015, Rigoberto Lobo and several of his family members were victims of a smear campaign carried out through anonymous social media accounts. The human rights defender was publicly accused of conspiring against the government, organising a coup and being a fascist. In April 2015, a friend of the his was warned by members of the security forces that “if his friend didn't abandon his work as a human rights defender he [would] be tied and dragged through the streets of Mérida”. Various other security incidents were reported throughout 2015.

The information made available to Front Line Defenders clearly indicates that Rigoberto Lobo has been deliberately targeted by both anonymous groups and law enforcement officials to persuade him to abandon his legitimate, lawful and peaceful human rights work. It is of particular concern to me that law enforcement officials - State representatives whose very duty is to defend and protect all Venezuelan citizens - are directly involved in actions that threaten the human rights defender's psychological and physical integrity. I am equally preoccupied that this occurs after the recently declared state of exception in Venezuela, which has the potential to undermine the security of human rights defenders conducting peaceful advocacy work on behalf of all Venezuelans.

I urge the authorities in Venezuela to:

1. Carry out an immediate, thorough and impartial investigation into the instances of harassment, threats, intimidation and aggressions against Rigoberto Lobo Puentes and his family members, with a view to publishing the results and bringing those responsible to justice in accordance with international standards;

2. Take all necessary measures, in consultation with the human rights defender, to guarantee the physical and psychological integrity and security of Rigoberto Lobo and his family.

3. Guarantee in all circumstances that all human rights defenders in Venezuela are able to carry out their legitimate human rights activities without fear of reprisals and free of all restrictions.