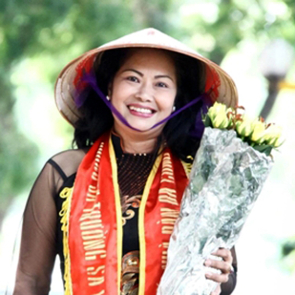 On 16 November 2017, human rights defenders Pham Doan Trang, Bui Thi Minh Hang and Nguyen Quang A were arrested by police after attending a meeting with the European Union Delegation in Hanoi to discuss human rights issues ahead of the EU - Vietnam Human Rights Dialogue, scheduled for 1 December 2017. After being kept incommunicado without access to legal representation, the human rights defenders were released. They remain under surveillance.

Pham Doan Trang is a human rights defender, blogger and journalist. She is the founder of online law and human rights magazine Luật Khoa and a member of the editorial board of newly launched The Vietnamese, an independent news website which aims to raise public awareness on politics and human rights in Vietnam. She has also worked for major Vietnamese media agencies such as VnExpress, VietNamNet, Vietnam Week, HCMC Legal Daily and the English language website Vietnam Right Now. In 2012, after being arrested and interrogated, she published a recording of her interrogation and was resultantly forced to temporarily leave the country. She returned to Vietnam in January 2015.

Bui Thi Minh Hang is a human rights defender, blogger, and documenter of human rights violations in Vietnam. She also advocates for freedom of religion and has provided support to victims of land grabs. In 2011, Bui Thi Minh Hang was arrested and sent to a “re-education camp” for six months as a result of her activism. In June 2012 the human rights defender was released, however she was arrested again in February 2014 while visiting a former prisoner of conscience. In August 2014, she was sentenced to three years in prison for “causing public disorder”. She was released in February 2017.

Nguyen Quang A is a human rights defender and a prominent member of Vietnamese civil society. In 2007, he co-founded the Institute of Development Studies (IDS), an independent, non-profit think-tank, since closed, that frequently questioned the government's policies. In 2013, he co-founded the Civil Society Forum in response to Decree 72, a party document that limits online expression. The forum has, among other activities, organised protests against environmental damage and promoted the participation of independent candidates for Parliament elections. Lately, Nguyen Quang A has been extremely vocal regarding the 2016 Formosa spill, an industrial disaster which caused tens of thousands of fishermen to lose their source of livelihood.

1. Immediately cease all forms of surveillance and harassment of Pham Doan Trang, Bui Thi Minh Hang and Nguyen Quang A, as I believe that these measures are not only solely related to their legitimate human rights activities but, furthermore, constitute a direct transgression of their rights;

2. Immediately return the phone and laptop confiscated from Pham Doan Trang during her detention as they are manifestly unrelated to any criminal activity;

3. Cease targeting all human rights defenders in Vietnam and guarantee in all circumstances that they are able to carry out their legitimate human rights activities without fear of reprisals and free of all restrictions including judicial harassment.