About Nilar TheinPlease send this letter and stand with Nilar Thein.Case History 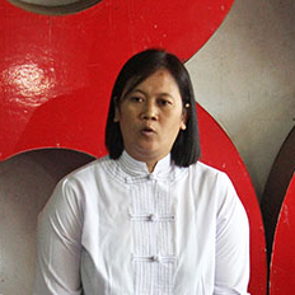 On 24 February 2016, human rights defender Ms Nilar Thein was arrested by police at the headquarters of the 88 Generation Peace and Open Society Group ('88 Generation Group') in Thingangyun township, Yangon, for supporting student protests against the controversial education bill in 2015.

Nilar Thein is a human rights defender and a prominent leader of the 88 Generation Peace and Open Society Group, a former students group formed to work for peace and to promote and protect civil society in Myanmar. Throughout many years of activism, she has fought for democracy, human rights and non-violent solutions to political conflict in Myanmar, including through the organisation of and participation in peaceful demonstrations. She is a former political prisoner who has spent more than 10 years in prison, beginning with her two-month detention in 1991 for pro-democracy activism under the previous military regime. In 2008 the human rights defender was sentenced to 65 years in prison for forming an illegal organisation and illegally using electronic media, but was released in January 2012 following an official pardon by President U Thein Sein. Upon release, Nilar Thein continued her human rights work.

On 24 February 2016, Nilar Thein was arrested by police officers from Bayinnaung Police Station in Yangon who were acting on the basis of an official arrest warrant. She was brought to the Yangon Division’s Mayangone township Court for a preliminary hearing, and was officially charged under Article 18 of the Peaceful Assembly Law for involvement in an unlawful protest in Yangon in March 2015 in support of students demanding amendments to the National Education Law. The charge carries a maximum sentence of six months' imprisonment. Nilar Thein has refused to pay any fines in connection with the charge and waived her right to appeal for bail, as she did not wish to comply with the court’s bail conditions. She is currently detained in Insein Prison in Yangon awaiting trial.

On 5 March 2015, Nilar Thein participated in a peaceful demonstration organised outside Sule Pagoda in Yangon to support 100 students who had been marching from Mandalay to Yangon in opposition to the government’s controversial education reforms. The human rights defender and other protesters urged the authorities to restrain from resorting to violence against the students, yet both protests were violently dispersed by police and a mob of people in plain clothes hired by the government. Nilar Thein was arrested and released on the morning following the protest, along with several others. No official charges were brought against her.

Enacted by Parliament on 30 September 2014, the National Education Law was intended to reform Myanmar's education system. In practice, however, it outlawed independent student and teacher unions and limited academic freedoms by erasing ethnic languages, cultures and literatures from university syllabus.

I strongly condemn the detention and charging of human rights defender Nilar Thein, which are believed to be solely motivated by her legitimate and peaceful activities in the defence of human rights in Myanmar.

I urge the authorities in Myanmar to:

1. Immediately drop all charges against Nilar Thein as it is believed that they are solely motivated by her legitimate and peaceful work in defence of human rights in Myanmar;

3. Guarantee in all circumstances that all human rights defenders in Myanmar are able to carry out their legitimate human rights activities without fear of reprisals and free of all restrictions.