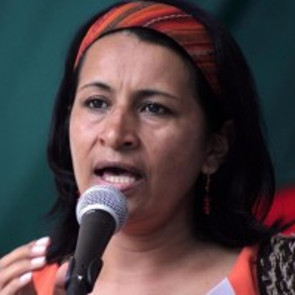 Marylen Serna Salinas is the leader of the campesino organisation, Movimiento Campesino de Cajibio - MCC (Peasant Movement of Cajibio), and also exercises leadership roles with Coordinador Nacional Agrario – CNA (Agrarian National Coordinator) and Cumbre Agraria, Campesina, Étnica y Popular (Agrarian, Peasant, Ethnic and Popular Summit). The human rights defender is also the national spokesperson for Congreso de los Pueblos (Congress of Peoples). MCC is a movement for the defence of indigenous and land rights in the northern region of Colombia and Macizo. CNA is an organisation which coordinates the campesino and indigenous movements in Colombia, in order to facilitate their struggle for land and other rights.The Summit gathers different indigenous, afro-descendent, campesino and popular movements in order to propose a new model to strengthen their rights and work. Congreso de los Pueblos is a social movement which brings together different sectors and social actors. Since its launch in 2010, it has had a prominent role in social mobilisations in Colombia, such as the agricultural strikes of 2013, 2014 and 2016.

On the morning of 7 April 2017, a peasant woman close to Marylen Serna Salinas was approached by three armed men, who forced her into a vehicle and covered her head with a black bag. The men beat the woman’s face and arm and injected an unknown substance into her right arm. She was interrogated as to the whereabouts of Marylen Serna Salinas and asked to clarify the nature of her relationship with the human rights defender. After the interrogation, the criminals took the vehicle to a quiet location in the city, where they tied the woman up and sexually abused her. The criminals then left without untying and freeing the woman and proceeded to call Marylen Serna Salinas to confirm her relationship with the victim, stating that the act was perpetrated as a result of their relationship and the work of the human rights defender. The crime had already been reported to the National Public Prosecution.

This gendered act of violence is the last one in a series of attacks, killings, threats and intimidation against social, indigenous, campesino and land rights movements in Colombia. In the last month, Front Line Defenders has reported several violations against human rights defenders in the country. Between 21 and 22 March 2017, during a series of coordinated events, the Police and the National Army conducted raids on homes and arrested several social leaders and human rights defenders from the southern Bolívar region, including members of the Congreso de los Pueblos. The Colombian State has previously accused social leaders of being linked to guerrilla groups without concrete evidence.

According to a report from the Colombian Ombudsman Office, 156 social leaders and human rights defenders have been killed in the last 14 months. In addition to that, 5 disappearances, 33 attacks and over 500 threats were reported. According to the Ombudsman, Carlos Alfonso Negret Mosquera: “one of the main causes of this phenomenon is the attempt by illegal armed groups to occupy the territory from which the FARC have withdrawn”.

On 2 April 2017, in the afternoon, human rights defender, José Vicente Murillo Tobo, also a member of Congreso de los Pueblos, attended a cultural exchange round-table for dialogue and consultation between indigenous and land rights organisations with the Colombian government. After the meeting, the human rights defender received a text message and a phone call containing threats against him for his human rights work. The person identified himself as Camilo and said he was the leader of Águilas Negras (Black Eagles), a paramilitary organisation in Colombia.

1. Carry out an immediate, thorough and impartial investigation into the crimes perpetrated against the woman close to the human rights defender, Marylen Serna Salinas, with a view to publishing the results and bringing those responsible to justice in accordance with international standards;

2. Take all the necessary measures to guarantee the physical and psychological integrity of the woman close to Marylen Serna Salinas, as well as of the human rights defender herself and all the members of Congreso de los Pueblos and other grass-roots organisations in Colombia;

3. Investigate the pattern of killings and harassment of human rights defenders, identify the root causes and the authors, and take determined action to prevent them,