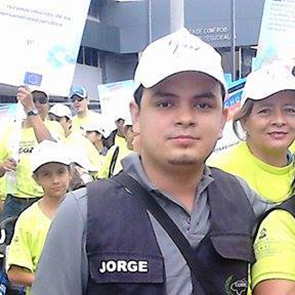 On 8 August 2016, human rights defender Jorge Jiménez received death threats through a letter that warned him to cut all ties to his human rights work within the next 24 hours or face death.

Jorge Jiménez is a member of the Comité para la Defensa de los Derechos Humanos en Honduras (Committee for the Defence of Human Rights in Honduras, CODEH), which monitors human rights violations, accompanies victims and conducts advocacy on their behalf. Jorge Jiménez became a leader of a student movement after the 2009 coup d'état that deposed former President Manuel Zelaya. As a result of the constant threats he has received due to his human rights work, the Inter-American Commission on Human Rights granted Jorge Jiménez precautionary measures (MC-95-10) to protect his physical and psychological integrity as well as that of his family.

On 8 August 2016, Jorge Jiménez received a letter warning him "the ones who paid us to kill you are demanding results this will hurt your family" (sic). The letter also threatens to hurt former CODEH President and current Honduran Ambassador to Cuba, Andrés Pavón. The letter concludes by telling the human rights defender to abandon any work related to CODEH or any relationship to Andrés Pavón, and that he will be killed within 24 hours. It is of particular concern that the letter repeatedly mentions that the human rights defender is unprotected at his home and whilst he travels outside of work hours. This is in contradiction to the precautionary measures that Jorge Jiménez and his family should be receiving as ordered by the Inter-American Commission.

Jorge Jiménez has received death threats against himself and his family before on 18 August 2015, 2, 6 and 11 February 2013. On 30 January 2014, an assassination attempt took place against Jorge Jiménez when a car attempted to run him over as he walked in the surroundings of the Emilio Larach Stadium.

Front Line Defenders condemns the death threats against Jorge Jiménez and his family, as well as other human rights defenders associated to CODEH. Front Line Defenders urges the State of Honduras to take immediate action to safeguard the human rights defender's physical and psychological integrity as well as that of his family, starting by fully implementing the precautionary measures granted by the Inter-American Commission, in consultation with Jorge Jiménez.

1. Carry out an immediate, thorough and impartial investigation into the death threats and assassination attempt against Jorge Jiménez and his family, with a view to publishing the results and bringing those responsible to justice in accordance with international standards;

2. Take all necessary measures to guarantee the physical and psychological integrity and security of Jorge Jiménez and his family, in consultation with the human rights defender, including through the full implementation of precautionary measures MC-95-10;

3. Guarantee in all circumstances that all human rights defenders in Honduras are able to carry out their legitimate human rights activities without fear of reprisals and free of all restrictions.