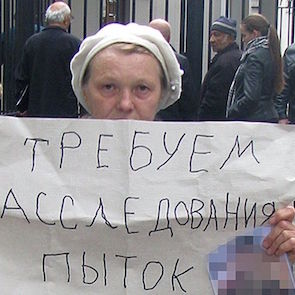 Elena Urlaeva is the Head of the Human Rights Defenders Alliance of Uzbekistan and organises public demonstrations for the right to freedom of association and assembly. She also communicates with victims of human rights violations on an individual basis, partly due to the lack of human rights organisations in the region. Recently, Elena Urlaeva has been monitoring cases of the subjection of Uzbek civil servants and students to forced labour with Malohat Eshonkulova. The evidence gathered by her and her colleagues, at the Human Rights Defenders Alliance of Uzbekistan reveal a widespread and systematic state policy of forcing citizens to weed cotton fields in several regions of Uzbekistan.

At approximately 12 p.m., on 9 October 2016, while Elena Urlaeva and Malohat Eshonkulova were monitoring forced labour in a remote cotton field in the Bukhara region, a police vehicle blocked their passage and police officers forcefully dragged them out of their vehicle and into the police car. The human rights defenders were detained and transported to the Olot District Department of Internal Affairs where they were interrogated for roughly 9 hours. While detained, they were subjected to strip searches, suffered physical attacks, received threats of judicial harassment, and their cameras and phones were seized. The police has kept no records of the detention, interrogation or the confiscation of Elena Urlaeva’s and Malohat Eshonkulova’s belongings.

On 6 October 2016, the National Security Service and local police  forcefully detained Ms Elena Urlaeva and independent photographer Mr. Timur Karpov while they were monitoring and documenting the forced labour of teachers and pupils in cotton fields in the Tashkent region of Uzbekistan. The human rights defender and photographer were transported to the Buka District Department of Internal Affairs, where Elena Urlaeva was first physically attacked by local pro-forced labour activist Yangurova Guizshahon outside of the Police Department. She was then violently beaten by several police officers inside the Police Department and interrogated by police and Security Service officers for about 8 hours. During her detention she was subjected to continuous physical assault, received death threats from the police, and had her belongings forcefully taken away from her. When released, some but not all of her belongings were returned to her, but there was no record made of the confiscated items. Once released, Elena Urlaeva attempted to file a complaint against the police for the misconduct, and to have evidence of the physical attacks made against her recorded, but this was refused.

Timur Karpov was detained for 9 hours, during which time the photographer faced continued verbal abuse, intimidation and death threats by the police officers. He was forced to write an explanatory report on his activities in the cotton field, and to provide the password for his personal mobile phone. Before he was released his mobile phone’s memory was erased. The police did not make any record of the detention and interrogation of Timur Karpov.

I condemn the death threats, arbitrary detention, physical and verbal attacks against human rights defenders Elena Urlaeva and Malohat Eshonkulova and independent photographer Timur Karpov, as I believe the actions against them to be motivated by their legitimate and peaceful human rights activities in Uzbekistan.

I urge the authorities in Uzbekistan to:

1. Carry out an immediate, thorough and impartial investigation into the arbitrary detention, death threats, physical and verbal abuse against Elena Urlaeva, Malohat Eshonkulova and Timur Karpov, with a view to publishing the results and bringing those responsible to justice in accordance with international standards;

2. Take all necessary measures to guarantee the physical and psychological integrity and security of Elena Urlaeva, Malohat  Eshonkulova  and Timur Karpov;

3. Return all of Elena Urlaeva’s and Malohat Eshonkulova’s arbitrarily confiscated belongings, as they are manifestly not linked to any criminal activity;

4. Cease the targeting of human rights defenders in Uzbekistan and guarantee in all circumstances that they are able to carry out their legitimate human rights activities without fear of reprisals and free of all restrictions, including judicial harassment and smear campaigns.