Take Action for Can Thi Theu 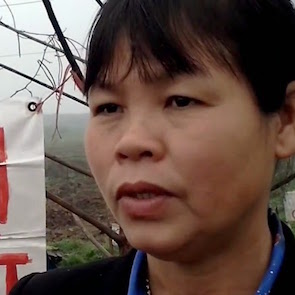 On 10 June 2016 land rights defender Ms Can Thi Theu was arrested in Hoa Binh province and charged with 'causing public disorder'. She is being detained in Hoa Lo detention centre in Hanoi.

Can Thi Theu is a land rights defender who has been campaigning against and documenting land seizures in Hanoi and surrounding provinces since her family farm was confiscated in 2007. She has been beaten and imprisoned as a result of her activities calling for adequate compensation for the confiscation of lands in Vietnam. Can Thi Theu has been helping others defend their land and highlighting government expropriation of land at unfair prices since 2007. All land in Vietnam is technically owned by the state and citizens only have the right to use it. This has led to thousands of people having land they have farmed for years being taken from them and being compensated with paltry sums.

In the early hours of 10 June 2016, several dozen police officers arrived at the family home of Can Thi Theu in Hoa Binh province in the north of the country. They searched her house, confiscated her mobile phone and detained her under Article 245 of Vietnam's Penal Code on a charge of “causing public disorder”, alleging she had been involved in disturbances of the Dong Da district of Hanoi. Can Thi Thue's sons, Messrs Trinh Ba Tu and Trinh Ba Phuong, were briefly detained on 13 June 2016 for calling for their mother's release.

Police can hold Can Thi Theu in custody for up to four months while they investigate her case and if found guilty, she could face imprisonment of up to seven years. The charges she faces reportedly relate to her role in organising a peaceful demonstration on 8 April 2016 commemorating the tenth anniversary of the founding of a pro-democracy group and demanding the release of detained human rights lawyer Mr Nguyen Van Dai. He has been held on a charge of 'conducting propaganda against the state' and has been held incommunicado since his arrest.

In January 2016 the human rights defender was briefly detained in Hanoi for protesting against attempts by the local government to seize family farms. She was released from prison in July 2015 following her arrest in April 2014. She and her husband, Mr Trinh Ba Tu, were imprisoned for 15 months. The human rights defender was arrested while using a camera to document a land grab in Ha Dong district in Hanoi and filmed police attacking protesters with sticks and batons. During the course of her arrest, she was beaten by police and charged with “resisting on-duty state officials”. On her release from prison in July 2015, Can Thi Theu continued to engage in peaceful demonstrations calling for the return of land which had been confiscated by the local authorities.

I am concerned by the arrest of Can Thi Theu, which it believes to be directly linked to her peaceful and legitimate work calling for adequate compensation for the confiscation of lands in Vietnam.

1. Immediately and unconditionally release Can Thi Theu and Nguyen Van Dai and drop all charges against them as it is believed that they are solely motivated by her legitimate and peaceful work in defence of human rights;

2. Take all necessary measures to guarantee the physical and psychological integrity and security of Can Thi Theu as well as of her family;

3. Guarantee in all circumstances that human rights defenders in Vietnam are able to carry out their legitimate human rights activities without undue restrictions, fear of harassment, threats or retaliation, and publicly recognise their important role in a just civil society.