About Djibo IssaPlease send this letter and stand with Djibo Issa.Case History 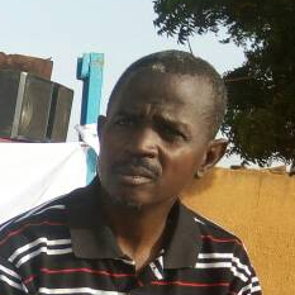 On 17 November 2017, Abass Abdoul Aziz, Abdoulaye Harouna and Djibo Issa were charged with “participation in an unauthorised protest”, “armed gathering”, “theft” and “complicity in theft”.

Abass Abdoul Aziz, Abdoulaye Harouna and Djibo Issa are human rights defenders, and president and members respectively of the Association de Défense des Droits des Consommateurs des Technologies de l'Information, de la Communication et de l'Énergie – ACTICE (Association for the Defence of the Rights of Consumers to Information Technology, Communication and Energy), a non-governmental organisation based in Niamey, Niger. ACTICE has most recently been advocating against corruption in Niger’s government. ACTICE and a number of other civil society organisations have raised concerns regarding the Finance Bill, which is to be approved by the National Assembly in 2018; primarily that the measures included in it will drastically increase the cost of living for many of those already living in poverty. ACTICE argues that the source of the current economic situation in Niger is poor management and corruption by the government and that the bill does not address this.

On 17 November 2017, the Prosecutor presented the case against Abass Abdoul Aziz, Abdoulaye Harouna and Djibo Issa and requested a sentence of 5 years in prison and a fine of 100,000 FCFA (around €840) for each. On 30 October 2017, Abass Abdoul Aziz, Abdoulaye Harouna and Djibo Issa were arrested by local police officers on charges relating to a protest which took place on 29 October 2017. They have been detained ever since. The protest had received prior authorisation from the authorities and was organised to challenge corruption and the adoption of the 2018 Finance Bill. On the day of the protest, a group of protesters strayed from the authorised route and began marching towards “Place de la Concertation” near the National Assembly. The protest was then repressed by police using tear gas.

On 30 October 2017, the Minister of the Interior issued a decree banning the organisation ACTICE from operating throughout the national territory. The decision by the judge in the human rights defenders’ trial will be released on 24 November 2017.

I express serious concern over the charges against human rights defenders Abass Abdoul Aziz, Abdoulaye Harouna and Djibo Issa along with their continued detention which I believe is solely a result of their legitimate and peaceful work in defending human rights and tackling corruption in Niger.

I urge the authorities in Niger to:

1. Drop all charges against Abass Abdoul Aziz, Abdoulaye Harouna and Djibo Issa as I believe that they are being held solely as a result of their legitimate and peaceful work in the defence of human rights;

3. Cease targeting all human rights defenders in Niger and guarantee in all circumstances that they are able to carry out their legitimate human rights activities without fear of reprisals and free of all restrictions including judicial harassment.