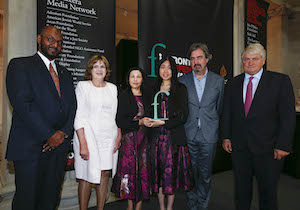 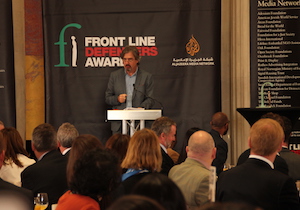 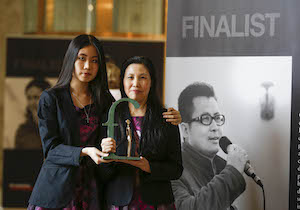 The Jury, consisting of: Mr Pat Breen TD, Chair of the Oireachtas Committee on Foreign Affairs and Trade, Senator Averil Power, Mr Ruairi Quinn TD, Mr Sami Alhaj, representing Al Jazeera and Ms Noeline Blackwell, Board of Trustees, Front Line Defenders received nominations from 27 countries. All 5 finalists for this year's Award are either in jail, in hiding or face the threat of jail because of their peaceful work defending the rights of others.

As we celebrate the courage and commitment of 5 exceptional human rights defenders it is a matter of deep concern that all of the Finalists for this year's Front Line Defenders Award are either in jail, in hiding or face the threat of jail simply because they have the courage to defend the rights of others.
- Mary Lawlor

In addition to Guo Feixiong, the Finalists for the 2015 Front Line Defenders Award for Human Rights Defenders at Risk were:

Juan Carlos Flores Solís, Mexico - an environmental rights campaigner, was recently released from prison, but has a charge pending, because he led the opposition of local peasant and indigenous communities to the construction of a gas pipeline on their land near an active volcano.

Diane Marie Rodríguez Zambrano, Ecuador - LGBTI rights activist and the first trans woman to stand for public office in Ecuador has been threatened, intimidated and even kidnapped because of her work promoting the rights of the transgender community. Despite the constant pressure she refuses to give up.

Rasul Jafarov, Azerbaijan - one of the most prominent HRDs in Azerbaijan, was arrested on bogus charges of “ illegal enterprise, tax evasion, and abuse of official power. A lawyer by profession, Rasul Jafarov is Head of the Human Rights Club and Coordinator of the Art for Democracy campaign, which has launched several campaigns against politically-motivated imprisonment, including the Sing for Democracy campaign which took place in the run-up to the Eurovision Song Contest in May 2012. On 16 April Rasul was sentenced to 6.5 years in prison, recently reduced by 3 months.

Yara Sallam, Egypt - is a human rights lawyer with the Egyptian Initiative for Personal Rights (EIPR). On 21 June 2014, she was arrested on the day of a peaceful demonstration against the controversial "Protest Law." On 29 October 2014, Yara, and a number of other activists, were convicted on these charges, despite the absence of credible evidence and clear inconsistencies in police reports of the event. She was sentenced to three years' imprisonment,three years' police monitoring and a fine of 10,000 Egyptian Pounds (approx. €1,000). This sentence was later reduced on appeal to two years' imprisonment, two years' monitoring and no fine.