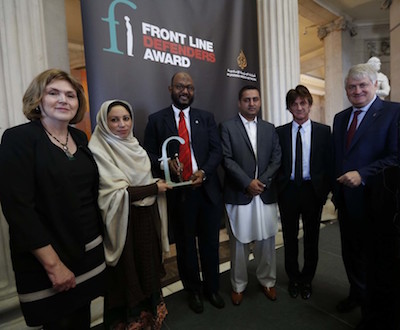 SAWERA was selected from a total of 135 nominees from 56 countries on the basis of the NGO's exceptional courage in defending the rights of women and girls in a region where groups working on these issues face extreme risks.

Noorzia Afridi and Sami Ullah of SAWERA were in Dublin to accept the award on behalf of the NGO. Noorzia Afridi thanked Front Line Defenders and her colleagues, “whose leadership and support contribute wonderfully to our journey towards human rights protection.” 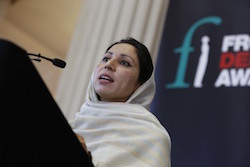 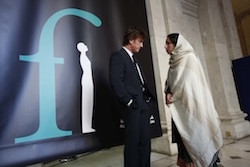 My deepest loyalty will always be to my other comrades in SAWERA, and having been nominated for this Award is a recognition of their achievement. I recognise we have all suffered greatly but together we have been able to work for the benefit of humanity with the ongoing and effective support of Front Line Defenders and other associations.
- Noorzia Afridi, SAWERA

In 2012, Ms Farida Afridi, one of the co-founders of SAWERA was shot dead while on her way to work and in 2013 the SAWERA offices were bombed, causing extensive damage to the infrastructure of the office building and the organisation's technical equipment. The staff at SAWERA continue to receive threatening telephone calls demanding that they cease their work but, despite the risks, they continue to work on issues pertaining to women's rights in one of the most traditional and culturally sensitive regions in Pakistan.

In addition to SAWERA, the Finalists for the 2014 Front Line Defenders Award for Human Rights Defenders at Risk were:

Ales Bialiatski is chairman of Human Rights Centre 'Viasna', one of the biggest human rights groups in Belarus which campaigns against the death penalty, torture and ill-treatment and on behalf of political prisoners. The organisation was forcibly closed down in 2003 and barred from holding a bank account in Belarus. This left its members open to prosecution for working for an unregistered organisation. Ales was later arrested for using his personal bank accounts in Lithuania and Poland to support the organisation's human rights work in Belarus. On 24 November 2011 he was sentenced to four-and-a-half years in a maximum-security prison for “concealment of income on a large scale”.

Berta Cáceres was a Lenca indigenous woman who was on the front lines defending the territory and the rights of the indigenous Lenca people for the last 20 years. She was one of the most important voices for social justice, the equitable management of natural resources, and women’s rights in Honduras. Berta was one of the founding directors of the Civic Council of Popular and Indigenous Organisations of Honduras (COPINH). She was at the forefront of a campaign against a mega-complex of four large dams in the Gualcarque River basin, called the Agua Zarca project. Berta paid a high price for her human rights work. Prior to her killing, she endured threats, intimidation and attacks and saw two of her colleagues murdered. Berta Cáceres was one of the most respected human rights defenders in Honduras.

Dr Mohamed Al-Roken is a leading lawyer and human rights defender in the United Arab Emirates. Despite official hostility and restrictive laws designed to curtail human rights activities, Mohamed has remained a champion of the rule of law and respect for universal human rights. He has defended those facing prosecution under arbitrary and unjust laws, especially other human rights defenders. He and his family have been subjected to ongoing harassment and intimidation to force him to give up his work. In 2012 he was forcibly disappeared, held in a secret location for eight months and tortured. Later that year, he was one of 94 human rights defenders and political activists arrested on charges of belonging to an Islamist group and plotting to overthrow the state. In 2013 he was sentenced to 10 years imprisonment after an unfair trial and prevented from lodging an appeal.

Adilur Rahman Khan is the secretary of the human rights organisation Odhikar. On 10 August 2013, Adilur was arrested without a warrant, held for 59 days, and later charged with 'publishing false images and information' and 'disrupting the law and order situation'. It is widely accepted that Adilur's arrest is directly related to a report published by Odhikar concerning a crackdown by security forces on a rally in May 2013. The report concluded that 61 people died in the incident while the Government continues to deny that any deaths occurred. Adilur was initially denied bail on 3 occasions, which he subsequently challenged, and on 08 October 2013 he was granted a six-month interim bail. The charges against him are still pending and it is suspected that newly fabricated charges are being compiled. Human rights defenders (HRDs) in Bangladesh work in an environment marred by judicial harassment, arbitrary arrest, fabricated charges and physical attacks.

Lydia Mukami is the chair of the Mwea Foundation, a grass-roots organisation of rice farmers in the Mwea constituency of Kirinyaga county, in the Central Province of Kenya. The Mwea Foundation has been at the forefront of an ongoing campaign to challenge the constitutionality of the 1966 Irrigation Act (Cap 347). The Mwea Foundation argues that the Act is retrogressive as it prohibits women from owning land, violates a host of socio-economic rights of the Mwea farmers and gives excessive powers to the National Irrigation Board (NIB) with regard to the administration of the area. Lydia and her colleagues at the Mwea Foundation have faced threats and direct violence as a result of their human rights work with Lydia herself being abducted, beaten and stripped of her clothes in public. She has also received threatening messages and her home has been torched.