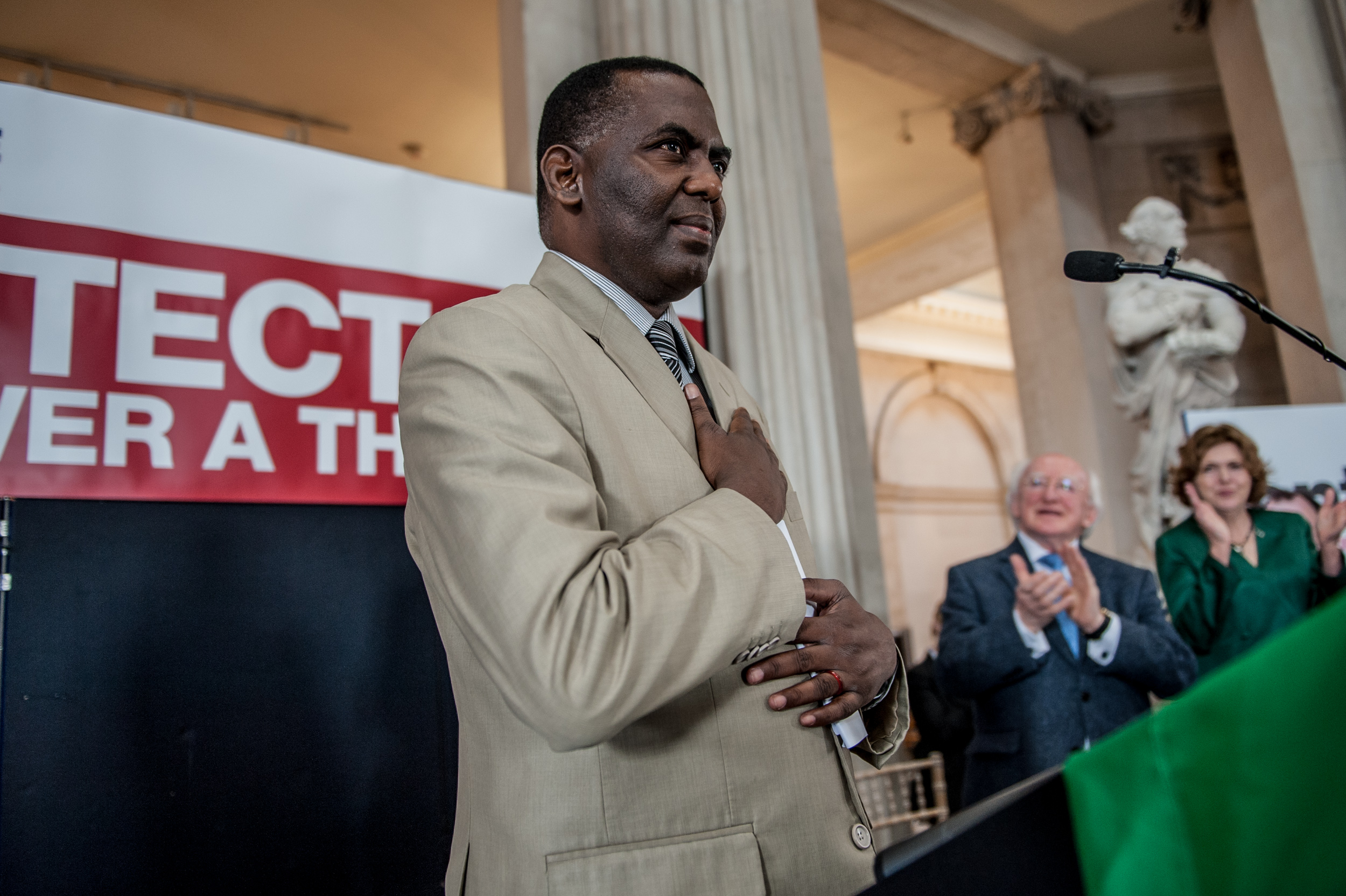 On Friday 3 May, President of Ireland Michael D Higgins presented the award to anti-slavery campaigner Biram Dah Abeid of Mauritania, founder and director of Initiative for the Resurgence of the Abolitionist Movement, Initiative pour la Résurgence du Mouvement Abolitionniste (IRA).

Biram Dah Abeid was selected from a total of 100 nominees from 40 countries on the basis of his exceptional courage defending the rights of the more than 500,000 people who are held as slaves in Mauritania.

Speaking at the Award ceremony Front Line Defenders Executive Director Mary Lawlor said “It is entirely fitting that we honour Biram Dah Abeid's work to end slavery in Mauritania in this room dominated by the statue of Daniel O'Connell - the liberator - the man who worked to end Ireland's own version of slavery with the ending of the penal laws and Catholic emancipation. Biram Dah Abeid follows in those heroic footsteps.” 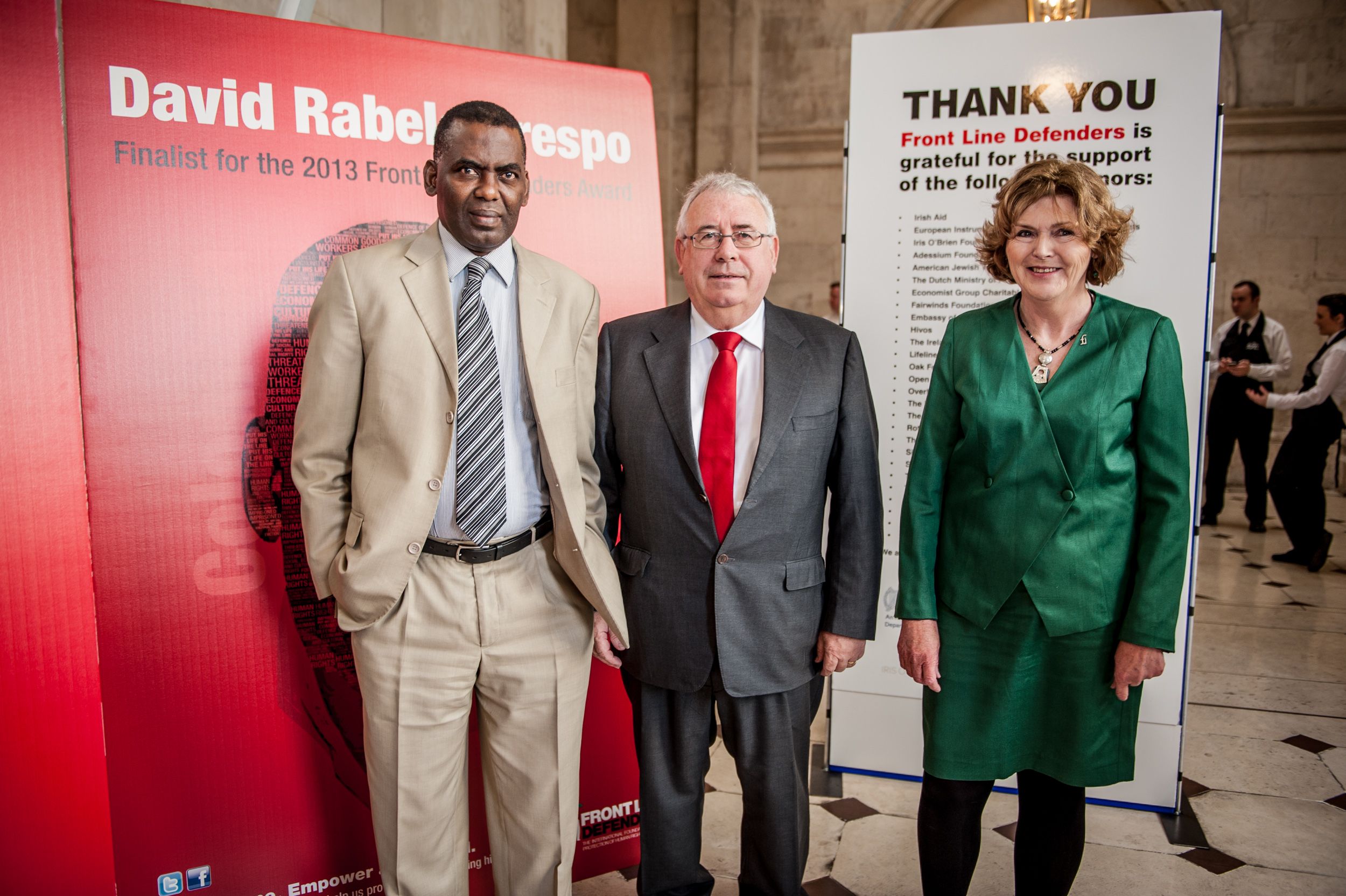 Despite the legal abolition of slavery in Mauritania and the Government's refusal to acknowledge its persistence, slavery remains endemic in Mauritania, accounting for between 10% and 20% of the population. Human rights defenders who speak out and challenge the practice are targeted by those who refuse to accept change.

Biram Dah Abeid has been threatened, defamed and harassed because of his work defending human rights and against slavery in Mauritania. He has been arrested and ill-treated on several occasions and in April 2012 he was “disappeared” for several weeks into a secret, high-security government facility, without being able to contact to his family and without any legal assistance. IRA Mauritania and other human rights defenders in the country believe he would have been killed but for the international outcry. He was released in September 2012 and continues his work inside Mauritania.

Despite the constant harassment and threat of arrest Biram Dah Abeid has sworn to continue the struggle until slavery is finally eliminated in Mauritania.

In addition to Biram, the following HRds were also finalists in 2013:

Mam Sonando is a journalist and the Director of one of only three independent radio stations in Cambodia. He is also founder and president of a national organisation called the Association of Democrats, which actively promotes democracy and human rights. Mam Sonando was arrested in early July 2012 on charges of instigating insurrection and incitement to take up arms against the state. He was sentenced to 20 years imprisonment on 1 October 2012. On 14 March 2013, the Court of Appeal ruled that jailed human rights defender Mr Mam Sonando should be released, which he was on 16 March 2013.

Mansoureh Behkish is a women’s rights activist. She is a vocal person amongst the Mothers of Khavaran (Iran) and an activist amongst the Mothers of Laleh Park (Iran). As a supporter of non-violent resistance and a HRD she has spent the past three decades empowering survivors and victims of human rights abuses. In particular she seeks to help the mothers, sisters and wives of the thousands imprisoned or executed by the Islamic Republic authorities, to seek justice through legal and humanitarian channels. As a result of her work as a HRD, she herself has faced continuous harassment, confiscation of her passport and violation of her right to travel and three terms of imprisonment.

David Rabelo Crespo is the secretary of the Board of Directors of the Corporación Regional para la Defensa de los Derechos Humanos – CREDHOS (Regional Corporation for the Defence of Human Rights), a non-governmental organisation dedicated to the protection and promotion of human rights in Colombia. On 14 September 2010 human rights defender David Ravelo Crespo was arrested in Barrancabermeja, Colombia. David was charged with criminal conspiracy and aggravated homicide, under the order of the Prosecutor 22 of the Unidad Nacional de Antiterrorismo based on voluntary statements given by the paramilitary Mario Jaimes Mejía, alias “El Panadero.” This paramilitary, a member of the Autodefensas Unidas de Santander y Cesar (AUSAC), was detained in March 1999 and condemned by the normal justice system as being the main person behind the massacres of the 16th May 1998 and the 28th February 1999. In June 2012 the trial closed. On 7 December 2012, David was sentenced to 18 years and 3 months' imprisonment.

Ruth Mumbi is a community mobiliser, and is the founder and current National Coordinator of Bunge la Wamama, a women's chapter of Bunge la Mwananchi a movement that conducts strong advocacy and campaigning on issues of social justice and accountability in different parts of Kenya.

Bahtiyor Hamraev was a dedicated campaigner for human rights in Uzbekistan for 15 years. As head of the Djizak regional branch of the Human Rights Society of Uzbekistan (HRSU) and he worked to document human rights violations in the region. In recent years he became the main contact with families of imprisoned human rights defenders, helping to spread the information about their conditions in detention, the torture and ill-treatment and helping to provide the families with legal aid and financial assistance.